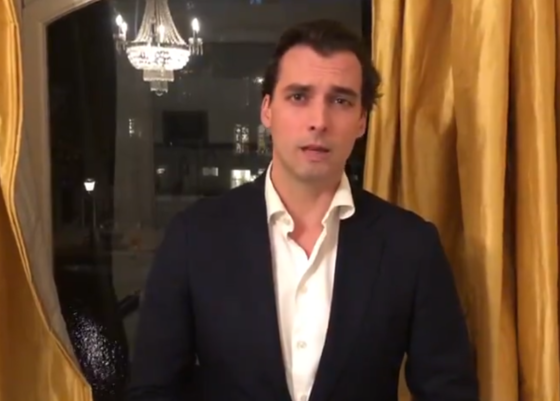 The board of far-right party Forum voor Democratie intend to hold a ‘binding referendum’ among members on the question of whether Thierry Baudet should remain party leader.

Baudet stood down as chairman and leader last Monday at the start of a turbulent week that brought the party to the brink of collapse, but later said he wanted to stand as a candidate in a new leadership election.

The board rejected Baudet’s plan, but on Monday it proposed balloting its members ‘as quickly as possible’ on the question of whether to retain him as leader prior to holding a general meeting at which a new board can be elected.

Baudet has not commented on the plan, which was posted on Forum’s social media account on Monday morning by his successor as chairman, Lennart van der Linden.

The crisis in the party continued over the weekend as several provincial party branches broke away to form independent groups, including the FVD chapters in Utrecht, Flevoland and Overijssel.

The problem is particularly acute in Noord-Brabant, where the collapse of FVD threatens to break up the right-wing coalition with the Liberals (VVD), Christian Democrats (CDA) and Lokaal Brabant.

The Telegraaf reported that Loek van Wely, a senator and Noord-Brabant assembly member, is on the verge of quitting the party, while a planned meeting of the provincial chapter on Sunday failed to go ahead.

There are also concerns within the party that a referendum would be impossible to organise at short notice because its membership list does not take into account the mass resignations of last week.

It is also not clear if a referendum on the leadership would in fact be binding. Political scientist Tom Louwerse pointed out that there was no provision for one in FVD’s constitutional statutes or any mention of the position of party leader.

Baudet’s mentor, Leiden University professor Paul Cliteur, resigned from the senate in solidarity with his protegé, while Forum’s other member of the lower house, Theo Hiddema, also gave up his seat.

Cliteur himself came under pressure over the weekend to publicly repudiate anti-Semitism in the party. The rector of Leiden, Carel Stolker, tweeted that ‘the accusation of a pattern of anti-Semitism around FVD is extremely concerning and affects Paul Cliteur too.’

A poll by Kantar last week of 245 voters who backed FVD in the last six months found that 39% would vote for Baudet if he was included on the party’s list of candidates in next March’s elections, while just under one in four (24%) would vote for the party if it were not led by Baudet.