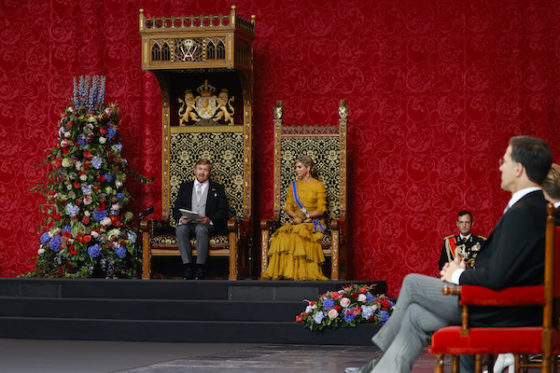 The Netherlands must ready itself for serious economic setbacks, king Willem Alexander said on Tuesday afternoon, in his official speech to mark the start of the parliamentary year.

The Dutch economy and government finances are healthy and financial buffers have been built up over the past few years which we can now benefit from, the king said.

‘Now we have to ready ourselves for the consequences of a serious economic setback, which will impact the economy and government finances in the long term,’ he said.

Much depends on how long coronavirus keeps us in its grip, he said. ‘But the recent figures and prognoses are unheard of in peace time,’ he said. ‘The economic setbacks facing our biggest European and global trading partners are in many cases even greater. For an open country like the Netherlands, with its focus on trade and exports, this is an extra complication, especially in the wake of Brexit.’

Nevertheless, the government has opted not to cut spending but to invest in ‘keeping jobs, good services and a cleaner country,’ the king said, outlining the measures the government has already taken to offset the worst impact of coronavirus on industry.

The king went on to list a string of measures which the government plans to implement in the coming year, most of which had already been leaked.

The king referred to the murder of lawyer Derk Wiersum, while mentioning that a new team to combat organised crime, which will include members of the armed forces, is being established.

‘There is another fundamental threat to the quality of the rule of law,’ the king said. ‘Too often, still, a person’s name or the colour of their skin determines their opportunities in life. That is unacceptable. The public debate on this issue sometimes causes friction, but it can also help us move forward in the fight against discrimination, racism and unequal treatment. Overcoming differences begins with being prepared to listen to one another.’

The king also spoke of the need to make sure the government is on the side of the people, not against them, by referencing the damage caused to houses in Groningen by the gas drilling, and the tax office child benefit scandal. ‘Investing in the quality of public services remains important,’ he said.

The coronavirus crisis is testing us continually, in everything of value, in our health, work, family and friendships, he said. ‘Now, in particular, we are being asked to show responsibility and unity… and everyone, young and old will have to play their part in getting through this difficult period.’

‘Our most important source of reassurance is the economic, social and psychological resilience our country continues to show,’ the king said. ‘The task ahead in the parliamentary year that begins today is to stay focused on the future beyond this crisis, and to keep working to create new prospects for every generation.