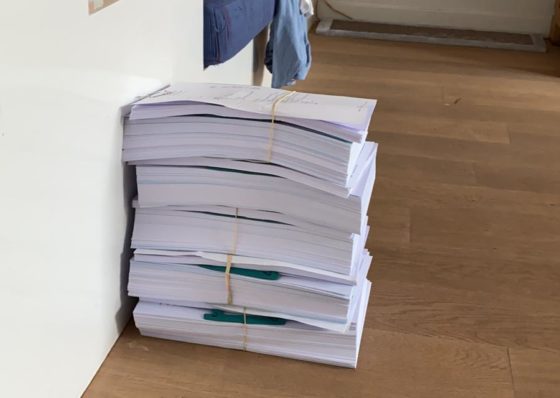 Airbnb is taking a group of individual Dutch holidaymakers to court because they have asked for a refund of service charges from as little as €40.27.

Since judges in Amsterdam ruled in March that the holiday rentals company could not charge both renters and holidaymakers for the hire of apartments, tens of thousands of Dutch residents have submitted claims for their money back.

According to that ruling, holiday rental landlords are charged 3.6% of the total rental, while holidaymakers pay a ‘service charge’ of on average 15%. But this, the Amsterdam court said, was not allowed under Dutch laws on double charging: only a landlord can be billed. Although the local court judgement does not set a legal precedent, it was unusual because three judges instead of one gave the verdict. Ten companies then began amassing ‘no cure no pay’ claims for service charge refunds worth millions of euros.

But now Airbnb has started its own court case in Rotterdam, sending bailiffs and 2kg of court documents to 20 claimants and the five largest claims firms, Rabbin, Twee Heren, Procedeerwinkel, Appeal and the Consumentenbond Claimservice. According to court papers seen by DutchNews.nl, it wants a court declaration that there is ‘no legal basis for repaying service charges billed by Airbnb to the travellers for using the Airbnb platform.’ It has also urged the Rotterdam judge to seek a binding legal opinion on the matter from the Hoge Raad supreme court, something that only a judge can request.

Some of the holidaymakers who received piles of papers and a summons to court in Rotterdam reacted with shock. Jacques Huppes, who won his case against Airbnb in March and was refunded €470, was surprised to be asked to declare the company owes him nothing.

‘These are the kind of paper bombs they are sending to their own customers, which is of course ridiculous,’ he said, showing a knee-high pile of documents. ‘The court of Amsterdam says that renters have the right to ask back the unduly paid service fee, and then Airbnb attacks the customers who follow the ruling of the court of Amsterdam.’

But the case was welcomed by Stef Smit, director of ConsumentenClaim, who is representing 25,000 Dutch consumers with claims of mostly €200 to €250, via the Consumentenbond rights organisation. ‘Airbnb has broken the law in the Netherlands because it charged both the people who rented out and who hired apartments,’ he said. ‘It lost a case in Amsterdam and various parties have started a claim, including the Consumentenbond. Up until now Airbnb has dismissed everything so we have to go to court to claim our rights. Whether we start the procedure ourselves or another party does, the costs are the same.’

He said that if the judge chooses to appeal to the supreme court, this would speed up the process and make it clearer for everyone. ‘If they make a judgement, everyone knows where they are,’ he said. ‘The sooner there is clarity for consumers about whether they will get their money back or not, the better. For us this is just business as usual – we are specialised in mass claims.’

Gert Poot, solicitor for Rabbin, told DutchNews.nl that he was also pleased with the latest case: the business has bought all of the rights to the refund claims from around 800 consumers, and will be making a counter-claim for this amount in the Rotterdam case. ‘This counterclaim will surely be more than €100,000,’ he said.

Meanwhile Frank van Oostrum, who co-founded Appeal, questioned the legality of Airbnb pursuing other law firms. ‘The issue with these proceedings against Appeal.nl, and the other organisations, is that none of these parties have any (contractual) relationship with Airbnb,’ he told DutchNews.nl. ‘Appeal.nl is not a claimant – we merely represent the claimants. In other words: Airbnb is knocking at the wrong address. You can compare it to the claimants suing Airbnb’s lawyers, De Brauw Blackstone Westbroek, which would be, to say the least, very odd.’

He added that ‘no-one should fear being involved in a legal battle with Airbnb’ and stressed that his organisation would cover the legal costs.

Airbnb argued in the March case that it should be governed by Irish law, since the organisation operating in the Netherlands is vested in Ireland, but in its latest court documents, it argues that Dutch laws governing housing transactions do not apply because it is an ‘online marketplace’ charging service fees for using its platform.

A spokesman told DutchNews.nl that individual claimants would not be ‘forced’ to go to court. ‘We attach great importance to the rights of both our hosts and guests and our aim is to seek clarity for all,’ Airbnb said in a statement. ‘We are waiting for the Dutch high court to provide certainty for everyone across the Netherlands.’

A spokeswoman for Rotterdam district court told DutchNews.nl that a judge has temporarily paused the latest case and said that if everyone involved agrees on the form of a question to ask the supreme court, the judge will ask for a binding opinion.

‘If the parties don’t reach agreement on the question to ask the supreme court, then a sitting will still take place,’ she said.