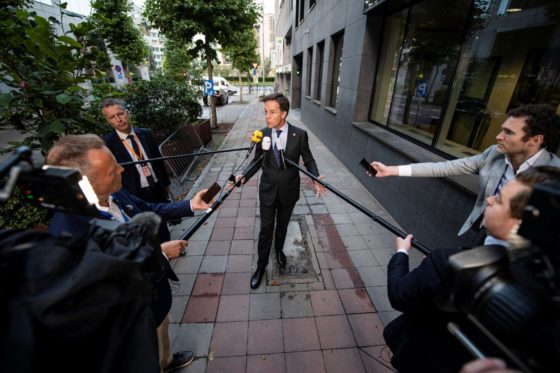 The EU summit on a coronavirus bailout package ended early on Monday morning without success so far, reports NOS.

‘The conversations last night made progress on a few things,’ prime minister Mark Rutte said in a briefing on Monday morning. ‘It looks a bit more hopeful than when I thought last night: it’s over.’

The heads of all 27 EU member states have traveled to Brussels to hash out an agreement on a package of financial measures to help countries whose public coffers have been drained by the Covid-19 pandemic. Rutte is leading a pack of so-called frugal countries which are resisting no-strings aid for countries like Italy and Spain.

On Saturday night, Macron and German chancellor Angela Merkel walked out of a meeting with Rutte and other ‘frugal block’ leaders.

Rutte and the Dutch government have been under fire for months for what their southern neighbours have described as a callous approach to the recovery plan. Finance Minister Wopke Hoekstra infuriated Spain and Italy in April when he called for the EU to ‘investigate countries which say they have no budgetary margin to deal with the effects of the crisis.’

Meanwhile, Hungarian prime minister Viktor Orbán told reporters over the weekend that Rutte ‘hates’ Hungary and doesn’t understand why the Dutch are attacking the central European country so hard.

The Netherlands and a number of other countries want to prevent member states which disregard the rule of law from receiving money from the new fund. Orbán has been criticized in recent years for intervening in the judiciary in Hungary and curbing the free press.

‘I hope we can reach an agreement,’ said Charles Michel, president of the European Council, late on Sunday evening. ‘I hope the news will be tomorrow that the EU has managed to do the impossible.’

The discussions will continue on Monday at 16:00.