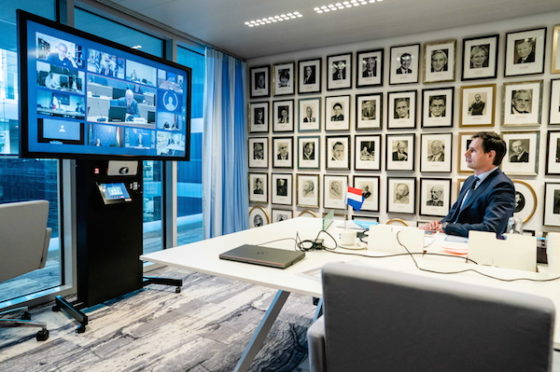 Video talks between EU finance ministers on finding a solution to fund the corona crisis carried on deep into the night but ended without resolution as divisions between the Netherlands and Italy continued.

The negotiations between the 19 eurozone ministers were suspended earlier in the evening for smaller group talks but these too failed to produce a breakthrough.

Italy is known to be keen to use the European Stability Mechanism to help pay for the crisis, but Dutch finance minister Wopke Hoekstra is among those opposed to the plan, unless strict conditions are attached. Austria and Finland support the Dutch line.

Hoekstra wants to make sure that countries which do get money from the ESM take measures to bring their domestic budgets under control. And on Wednesday morning, Hoekstra again reiterated the Dutch opposition to the use of euro, or coronabonds to fund the crisis.

Hoekstra infuriated Spain and Italy last week with his blunt rejection of coronabonds and his suggestion that the EU ‘investigate countries which say they have no budgetary margin to deal with the effects of the crisis.’

Hoekstra was later forced to say the the Netherlands does want to help. ‘We should have said what we did differently,’ Hoekstra told reporters.

According to Politico.eu, the talks will resume on Thursday.

After 16h of discussions we came close to a deal but we are not there yet.
I suspended the #Eurogroup & continue tomorrow, thu.
My goal remains: A strong EU safety net against fallout of #covid19 (to shield workers, firms &countries)& commit/ to a sizeable recovery plan pic.twitter.com/kGHoURgdrv

The Netherlands has come up with the idea of establishing an EU emergency fund to cover the immediate health costs associated with the coronavirus outbreak and is prepared to contribute around €1bn.

The EU has already come up with several measures to help member states keep jobs and help hard-hit regions.