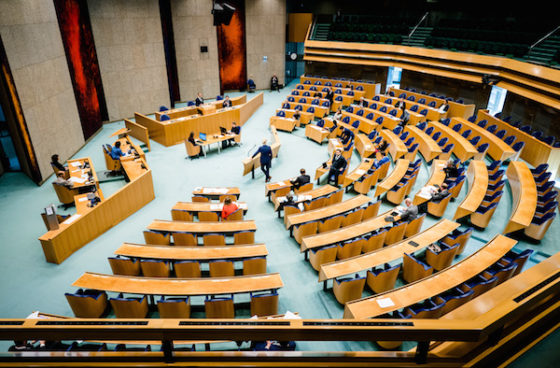 A virtually empty parliament during the debate. Photo: Bart Maat/ANP via HH

The Netherlands has proposed establishing an EU emergency fund to cover the immediate health costs associated with the coronavirus outbreak and, according to Trouw, is prepared to contribute around €1bn.

The fund, prime minister Mark Rutte said during Wednesday’s debate in parliament, would be filled by contributions by member states and would be a ‘gift to those in need’ rather than a loan or a guarantee.

‘This country stands in solidarity with countries that are also hard hit, some even harder, including their economies,’ Rutte said. ‘There can be no doubt about it. We want to help those countries.’ The fund, he said, would cover medical expenses for countries which need it and which have been hard hit financially.

Eurobonds and using billions of euros from the European emergency fund ESM are a ‘no go’, Rutte has said, because this would conflict with EU treaties and national control of member state budgets.

Rutte and finance minister Wopke Hoekstra have both been heavily criticised for showing a lack of solidarity to fellow EU countries who are struggling to cope with the coronavirus pandemic, particularly through their vehement opposition to coronabonds.

Hoekstra in particular, was attacked for seeming to suggest that southern EU countries had not bothered to get their finances in order in the wake of the 2007 economic crisis. A group of Italian mayors and regional governors even bought a page in German paper Frankfurter Allgemeine Zeitung in which they accused the Netherlands of not being ethical or showing solidarity.

Italy’s prime minister Giuseppe Conte later told the Telegraaf that the relationship between the Netherlands and his country had not worsened, even though many Italians do not understand the Dutch apparent reluctance to accept a ‘strong, rigorous and effective’ European approach to the crisis.

‘It is a health, economic and social crisis,’ he told the paper.

Meanwhile, a group of 78 Dutch prominent economists have signed a letter published in the Volkskrant newspaper in which they described the Dutch position as counterproductive. Not only would it stimulate the European central bank to act alone, but it could damage Dutch effectiveness within the EU, the economists say.

‘We should choose our moments,’ the economists said. ‘Of course countries need to reform and get their spending in order… but this is not the time for that discussion.’

Now, in particular, support for weaker EU countries is crucial, the letter states. ‘The coronavirus is a community enemy which requires a community response.’