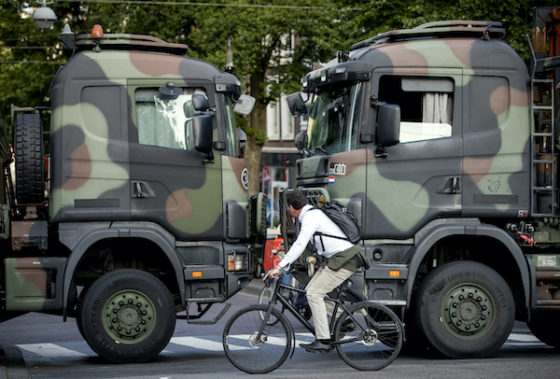 Army trucks have sealed off parts of The Hague city centre on Friday in an effort to stop a second potential protest by farmers.

On Thursday nights, dozens of farmers, some on tractors, came to the city to demonstrate against farm ministry plans to cut the amount of protein in animal feed and so reduce the amount of ammonia produced in manure.

City officials requested the army send in 25 trucks with 60 soldiers to help keep any potential demonstrators at bay, the AD reported.

MPs voted at 3.30am in favour of the plan to cut the protein content of feed after a long debate ahead of the summer parliamentary recess.

Despite farmer and MP concerns, farm minister Carola Schouten said the measure had to be implemented as soon as possible ‘to enable the construction sector to start working again’. The measure was one of several recommended by a government committee set up to assess ways to cut nitrogen-based pollution.

MPs from the coalition parties VVD and CDA had called on the minister to let an alternative plan, drawn up by farmers themselves, be checked by the Environmental Assessment Agency PBL, but Schouten said there was no time for this.

This in turn, say ministers, will allow the construction sector to start moving again, particularly to build thousands of new homes.

Schouten dismissed concerns that cutting the protein content in animal feed would be bad for cows. Dutch cows eat more protein than they need and ‘we are not going down to the limits for animal health,’ she said.

On Thursday night there were protests by farmers on tractors in several places, including The Hague, Breda and at Groningen airport.