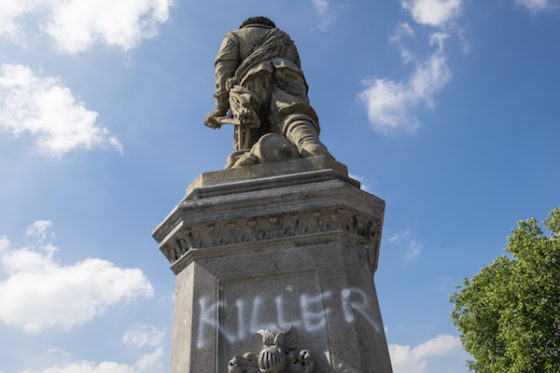 Taking down the statues of controversial people from history, as has happened in other countries, will not solve racism in modern society because ‘history is history’, prime minister Mark Rutte has told reporters.

‘Pulling down statues is not the answer,’ Rutte said. ‘Our history is one of pluses and minuses. And if there are parts of our history which we are no longer proud of, then we should be able to talk about them… but you cannot make history disappear.’

Instead, the prime minister said, we should explain the pros and cons attached to controversial figures. J P Coen, a seafarer whose statue was daubed with paint on Friday was, Rutte said,  ‘a visionary, but he also led punishment expeditions against on the Banda Islands, in which thousands of people died.’

The town council in Hoorn, where the statue is located, placed a board next to it in 2012 outlining what Coen did. Such a move is a good idea, the prime minister said, but not something that he would make compulsory.

Meanwhile the Witte de With arts centre in Rotterdam, which was also attacked with paint on Friday, has said it will now press ahead with choosing a new name, three years after it first mooted the idea.

The centre takes its name from a vice-admiral in the Dutch navy who played a pivotal role in several major sea battles, but also laid waste to the city of Jakarta in 1618.

The Tropenmuseum in Amsterdam, also attacked with paint, said it has no plans to make a formal complaint. ‘We see what is happening in society at large and it would not be appropriate,’ director Stijn Schoonderwoerd told the Parool.

Amsterdam city council has also said it will carry out an inventory of statues, buildings and street names with a link the city’s colonial past, with a view to placing explanatory notes next to them.

‘It is not up to politicians to say what is controversial, it should be part of a wider discussion in society,’ the council said in a statement. ‘But we do not accept vandalism and we will take action against it.’

The paint attacks are the work of an artists collective calling themselves Helden van Nooit (heroes from never).