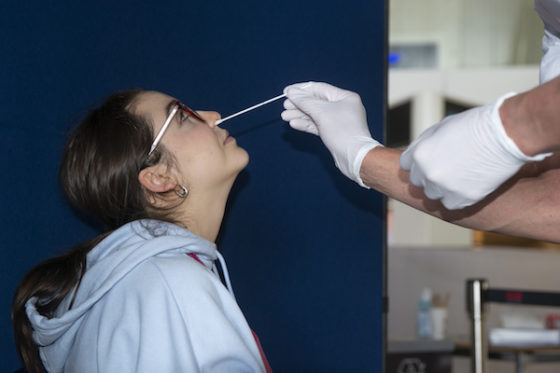 Mass testing at the RAI in Amsterdam. Photo: Sabine Joosten via HH

Health service workers have carried out almost 50,000 coronavirus tests on members of the general public since mass testing was introduced on June 1.

Of those tests, around 1,000 have proved positive, Sjaak de Gouw, who is in charge of infectious diseases at the regional health board association, told television talk show Op1 on Sunday night.

In total, 59,000 appointments were made in the first week of operation and the tests which have not yet been carried out will take place on Monday, De Gouw said. Around 2% so far have been positive. Officials said earlier they expected a positive result of between 2% and 8%.

In earlier testing programmes, 17% of residential home residents and 5% of teachers proved to be positive, De Gouw said.

The national hotline to apply for a test opened on June 1 and was immediately flooded with calls. However, around 90,000 separate individuals appear to have actually made a call, because many people were forced to phone several times to make an appointment.

In addition, a large number of callers rang for something other than a test, such as information about travelling abroad, De Gouw told the programme.

According to the Telegraaf, not everyone is being told the results of their test within 48 hours, and some phone operators are so frustrated they are breaking the rules and telling people, rather than waiting for an official to do it.

‘People phone up and I can see on my screen that the result is positive or negative, but I am not allowed to say anything,’ one phone operator told the paper. ‘So we do it by avoiding the terminology, by saying that they do not need to worry.’

The health board association told the paper it is important that people who phone in are not given the results of their test because their identity must first be verified.