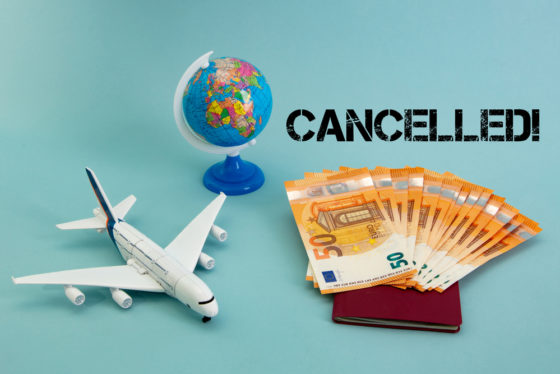 Thousands of consumers in the Netherlands are confused and concerned after airlines have offered them 12-month travel vouchers instead of refunds for cancelled flights.

The Consumentenbond consumer organisation says that EU law is clear and that they should be able to get their cash back within seven days. But instead, some have started formal complaints, others have obtained cash back via their payment cards, and many complain of spending hours on calls trying to get some clarity. Most who contacted DutchNews.nl have been offered vouchers with a 12-month validity instead of refunds.

Dutch infrastructure minister Cora van Nieuwenhuizen has said the Netherlands – and other countries – are turning a blind eye to the cash back requirement ‘to protect the financial position of airlines’. She has asked EU countries to create a fund to guarantee refund vouchers if the airlines collapse before they can be used.

In a briefing to MPs earlier this week, she said that Air France-KLM is expected to owe €3bn in cancelled tickets and Lufthansa and IAG are thought to owe similar amounts. She asked consumers to accept vouchers instead rather than exercising their legal rights.

But the Consumentenbond – which last year asked the minister to create a Dutch fund guaranteeing plane tickets in the same way that package holidays are protected if firms fail – believes this is not adequate.

Joyce Donat, spokeswoman, told DutchNews.nl that airlines are lobbying European politicians hard to tell people to accept vouchers rather than enforcing the law. ‘We think you still have the right to your money back, so we advise you to make a written complaint saying you are accepting any voucher under protest but still want your money back,’ she said.

‘After a year, if you didn’t use the voucher, you can then ask for your money back. We still want a pot of money to guarantee consumers against airline bankruptcies.’

A European fund, she added, would be too slow in coming. Her organisation is lobbying for the Netherlands to set a good example in pledging that nobody will lose their flight money and the government will refund this investment if airlines fail.

However, scores of DutchNews.nl readers have emailed to say that they are concerned. One said she was in dispute with KLM after it refused to refund her additional hotel and food costs due to cancelled flights at the end of March, and has taken her case to the EU Online Dispute Resolution platform.

Liviu-Alexandru Ciurez said he was frustrated with a ‘lack of transparency’ amongst airlines about compensation for cancelled flights: although his girlfriend received a refund from Romanian operator Tarom within two weeks for flights she had booked, he claimed he has not yet had a clear response from Lufthansa.

A travel planner told DutchNews.nl that – while he understood that airlines had liquidity problems – he only accepted vouchers if they added an amount of compensation to cover potential price rises in future. Otherwise, he has filed successful chargeback claims with his bank. ‘Perhaps if airlines were more flexible when their customer needs to make a change, I would be more flexible for them now,’ he added.

Although there were positive stories – such as refunds for Aeroflot flights, operated by KLM, for Vadim Iurov and a good response from American Airlines for Danielle Richter – many DutchNews.nl readers said they were confused and frustrated.

Isabella Magro has been desperately trying to return from Brazil for two months to wish her partner happy birthday on 7th May but has had no luck in rebooking her SwissAir flight. Others are not sure of holidays a year ahead and whether they would be able to use tickets later.

A spokeswoman for KLM told DutchNews.nl that this was an unprecedented situation leading to mass flight cancellations and it believed issuing refundable vouchers was a fair solution to protect passengers and its ‘operational realities’. Refundable tickets would be refunded as normal, she added.

‘Our aim is by no means to deprive our passengers of their existing rights,’ the airline said in a statement. ‘However, when flights have to be cancelled because of today’s unique circumstances with global border closures and restrictions on free circulation preventing passengers to reach their airports of departure, the issuance of these vouchers enables us to provide passengers more flexibility and choice during a period of uncertainty.  In addition, the vouchers are refundable after 12 months if unused, by which time we hope to have resumed our full schedule.’

Frequent traveller Sebastian Walburg van Gent said that he has heard that his claim for two vouchers for cancelled KLM flights will now take ‘multiple weeks to process’ but added: ‘This is a global emergency and whilst I’m sure a ticket refund or voucher will be important to some, hopefully most will have the grace to think about the big picture. EU and US governments switched off a whole industry when they advised people not to travel and then closed borders. We will need [flight] services more than ever when this is all over.’