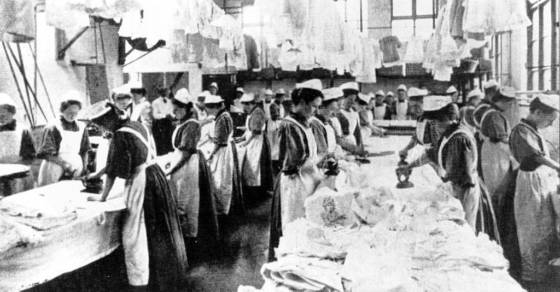 Five former inmates of the Catholic order of the Sisters of the Good Shepherd, have subpoenaed the nuns to appear in court on charges of forced labour, the NRC reports.

The women want the abuse they suffered to be recognised and the money they were denied to be paid to them. The order has always refused, arguing there is no legal basis for the accusation because the events took place too long ago.

It is up to the court to decide if this argument is valid. The statute of limitation rule is rarely lifted, the paper said, although the judge may take into account the fact that for decades the women had been too traumatised to ask for legal redress.

In the Netherlands at least 15,000 young girls and women were forced to work in the laundries and sewing rooms of the Catholic order of the Sisters of the Good Shepherd between 1860 and 1979.

The order had homes all over Europe, Canada and Australia where girls were forced to work, with some of the most notorious abuse taking place in the Magdalene laundries in Ireland.

In the Netherlands, where the order ran homes in Zoeterwoude, Almelo, Velp and Tilburg, girls – prostitutes or unmarried mothers but more often orphans, disabled girls or girls convicted of petty crime – were put into the homes against their will by parents and official child protection organisations until the late 1970s.

Once in the home the chores, presented as ‘work therapy’ turned out to be forced labour in what was in fact a textile factory with clients including hospitals, hotels, the church and the government. For example, in 1933 an order for 40,000 army shirts was given to the nuns. In Velp the girls even made the dowry of the late princess Juliana.

Apart from hard unpaid labour the inmates of the homes were also subjected to sexual abuse, harsh punishments and a lack of medical care and education.

An independent investigation into the abuse last year concluded that the women had indeed been subjected to slave labour, including according to the norms of the time.

The five women, who lived at the institution between 1951 and 1979 and were between 11 and 21 at the time, will be represented in court by lawyers Liesbeth Zegveld and Brechtje Vossenberg.