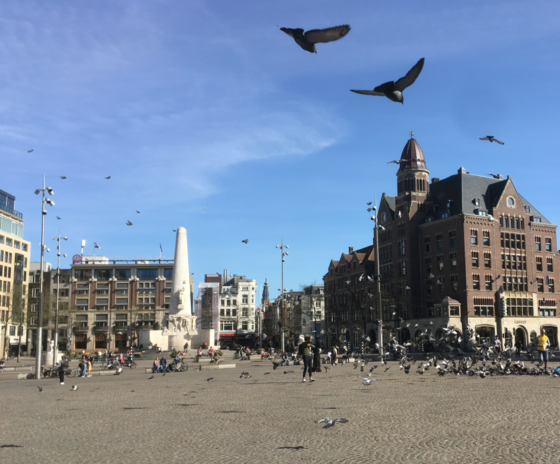 With signs that the spread of coronavirus is being brought under control in the Netherlands, here is a round-up of the questions you may have about the Dutch approach, updated on April 22.

How many people have died from Covid-19 in the Netherlands?
The official death toll on April 21 was 3,916.However, this only includes people who have tested positive for coronavirus. Other countries, such as the USA and Belgium, included people in their figures who had ‘suspected’ Covid-19 symptoms when they died, even if they were never tested.

Figures published by the national statistics agency CBS indicate that the true total could be almost double the official number. These figures were based on raw death certificates, which show that in the second week of April, over 2,000 more people died than would normally be expected in the 14th week of the year.

Family doctors and nursing homes are also now registering deaths they think may be due to coronavirus in an effort to compile more accurate figures, as well as suspected cases.

Is the death rate in the Netherlands worse than other EU countries?
There are various graphs circulating which indicate the death rate in the Netherlands is higher than in other European countries. On April 17 the official death rate was 202 per million, the sixth highest among countries with more than 1,000 fatalities. However, different countries use different measures and it will take months before a proper comparison can be made. Additionally, other countries where the outbreak peaked later, such as the United States, may overtake the Netherlands in the next few weeks, as Belgium and the UK did earlier. See our explainer from April 2.

Who is being tested?
Healthcare staff, who now account for 28% of positive tests, as well as people admitted to hospital who are thought to have coronavirus and others with severe symptoms. People working in nursing and domiciliary care are also now being prioritised as testing capacity is increased. Teachers will also be offered tests when primary schools reopen.

Some health boards are setting up ‘drive-in’ testing facilities for staff. Blood bank operator Sanquin has also been studying blood and plasma donations to see how many people are resistant to the virus, but early indications are that only around 3% of people have developed antibodies and the WHO stress that this does not guarantee immunity. Only doctors are allowed to order tests.

Why are more people not being tested?
The government has expanded testing capacity to 17,500 a day and can ramp this up to 29,000. However, De Jonge says the number is currently below this because of a continuing shortage of essential equipment and supplies.

A leaked document from the test coordination agency seen by broadcaster NOS suggests that supplies have now been ordered which will allow 2.7 million coronavirus tests to be carried out within the next six months – or some 14,000 tests a day.

The Netherlands accepts that more testing is essential to show how the disease is spreading ahead so officials can decide if the lockdown can be partially lifted. The government hopes that the use of an app to track contacts of people with coronavirus will also help in this.

Where is coronavirus concentrated in the Netherlands and why?
The epidemic is worst in the south of the country, particularly in the provinces of Noord- Brabant and Limburg. Experts think this is probably linked to the fact the south had a later winter half term holiday than the north and this meant more people who went skiing, particularly in Italy and Austria, were exposed to the disease.

Carnaval, which partly coincided with the holidays, is also more widely celebrated in the south. Since the start of April Zuid-Holland has overtaken Noord-Brabant as the province with the most cases.

Experts have suggested the northern provinces of Groningen, Friesland and Drenthe could emerge from lockdown sooner than the rest of the Netherlands because of the much lower rate of infection in the region. The three provinces, with a combined population of 1.7 million, are recording fewer than 50 new cases per day.

What form does the Dutch ‘intelligent’ lockdown take?
Everyone has been asked to keep a distance of at least 1.5 metres from other people and groups of more than three people are banned in public. Those who do not comply can be fined €390 each.

People should work at home if they can and stay home as much as possible. Schools have made daycare arrangements for children of people working in essential professions such as healthcare, the police, local government and the media. Primary schools and daycare centres are being reopened from May 11, but not secondary schools.

Bars, restaurants, museums, cinemas – basically anywhere where large groups of people gather – are closed until May 20, at least and visits to nursing homes are prohibited. All organised events, such as festivals and football matches, have been banned until September 1 at least.

But shops, including non-food, have not been closed, and people are still allowed to go out for a walk and get some fresh air. Some beaches, nature reserves and parks have been closed at weekends because too many people have been visiting them to allow them to keep the 1.5 metre rule. Mayors have the power to close any public space that becomes too busy.

When are the measures likely to be relaxed?
The government will decide in the week prior to May 20 if any of the measures should be relaxed after that date.

How would a tracker app work and what impact will it have on our privacy?
The World Health Organisation says tracking infected people, and tracing and alerting their contacts, are vital if the disease is to be kept under control after lockdown. However, Dutch efforts to fast-track development of an app appear to have flopped, and health minister Hugo de Jonge says he is now going to commission his own.

The app is expected to use Bluetooth technology on mobile phones to see who has been in contact with an infected person. Phones will be monitored with anonymised codes so they cannot be linked to the owner. Location data will not be stored.

Privacy campaigners are concerned that if the app is rolled out too quickly it will not be secure or sufficiently anonymous and have questioned its effectiveness. The government’s target is for 60% of people to use the app, but in SIngapore, where a voluntary app was introduced, take-up is around 20%.

Why are officials not encouraging people to wear face masks?

Two reasons. First, the government’s advisors say the use of face masks would only have a marginal effect on preventing the spread of coronavirus. And secondly, there are not enough masks to supply the healthcare sector, where they are urgently needed. The shortage is particularly acute in nursing homes.

However, Jaap van Dissel, head of infectious disease control at the public health agency RIVM, told MPs on Thursday that once the shortage has eased, face masks could have ‘added value’ in some situations where maintaining a distance of 1.5 metres is difficult. Masks could also play a role in the exit strategy from the lockdown. The Belgian and German governments have both advised people to use face masks outdoors, but not made them compulsory.

The RIVM is also concerned that wearing masks can give people a false sense of security and make them less careful about washing their hands and keeping a safe distance.

What is the situation in nursing homes?
Concerns have been mounting about the hidden coronavirus death rate and nursing homes are known to have been hard hit.

A week ago, Jaap van Dissel told MPs that coronavirus cases have been identified in at least 900 of the Netherlands’ 2,500 nursing homes. Visits to nursing homes have been banned since March 19 in an effort to contain the spread of the disease and remain in force until May 20 at least.

The NRC reported on Thursday that there have been at least 5,300 known cases of coronavirus in nursing homes. The paper derived the figures from two electronic registers used by nursing homes to exchange information about patients.

Nienke Nieuwenhuizen, chair of the geriatric care association Verenso, said last week that deaths in care homes had increased fivefold in the past two weeks. The organisation says the shortage of protective equipment for nursing staff has hampered its efforts to contain the virus.

What measures are in place to support the economy?
The government has come up with a package of measures to help the economy, businesses and the self employed. You can find out more here. Additional measures have been brought in to help start-ups, and the arts and culture.