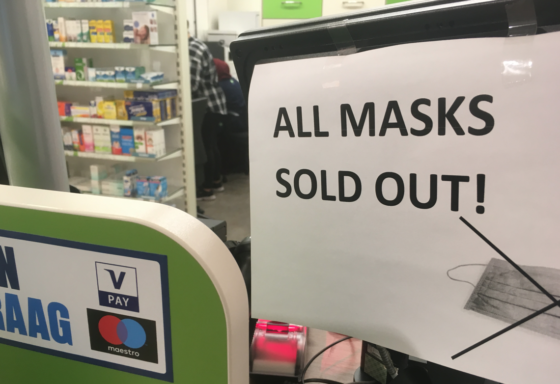 The Dutch government is holding firm to its refusal to make the wearing of face masks compulsory, despite mounting pressure from MPs.

Nevertheless, both prime minister Mark Rutte and his senior advisor Jaap van Dissel say that masks could have a minor role in an exit strategy from the current ‘intelligent lockdown’ in the Netherlands.

‘Masks are not a substitute for 1.5 metres,’ Rutte told MPs during Thursday’s debate on the government’s handling of the coronavirus crisis.

Nevertheless, the prime minister said, they could be useful in allowing certain professions, such as hairdressers to get back to work, where the 1.5 metre rule is impossible to enforce.

The German government has recommended locals wear masks in shops and on public transport, and the Belgian authorities are poised to make similar recommendations.

But Van Dissel, head of the infectious diseases department at the public health institute RIVM, says he is concerned that using masks would give rise to a false sense of security and that people would stop washing their hands and keeping their distance if they were made compulsory.

In addition, healthcare workers should have priority in the distribution chain, he said.

Other infectious disease experts consulted by broadcaster NOS agree. ‘The droplets which are released by coughing and sneezing don’t remain in the air, but drop to the ground at a distance of 1.5 metres,’ Tess Lauret, an expert in prevention at Amsterdam’s UMC teaching hospital said.

Home-made masks are also not a solution, she said. ‘The virus can get past them. You think you might be safer but you are not,’ she told the broadcaster.

Other experts point out that the virus also enters the body via the eyes and through not washing your hands, and that removing a mask that has been worn all day is a hazardous operation in itself.

The World Health Organisation also recommends leaving masks to healthcare workers, unless people have symptoms because ‘there is no evidence that they protect people who are not sick’.

Leiden University social psychology professor Carsten de Dreu told the NRC that group animals like humans watch what others are doing when keeping alert for danger.

‘That is the most effective way to protect yourself at times of threat,’ he said. ‘So it is hardly surprising that the Dutch are saying “what they do abroad, we want to do to”,’ he told the paper.