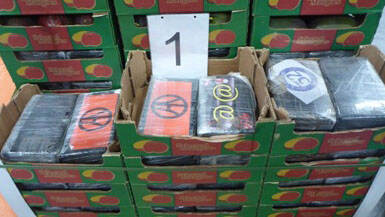 Police and customs officials based at Rotterdam port have seized a total of 1.2 tonnes of cocaine since Friday, the public prosecution department said on Monday.

Most of the cocaine – 1.17 tonnes – was found hidden in a container packed with mangoes from Brazil. The consignment was due to be delivered to a company in Zwaag.

Two other small shipments were found in refrigerated containers from Brazil containing lime juice. They were both heading for a company in Rotterdam.

The drugs have since been destroyed and the companies where the fruit and juice was heading were not involved in the drug smuggling efforts, the department said.

Meanwhile, some 30 sheep and goats have been killed in a fire at a drugs lab in the Zeeland town of Poortvliet.

The blaze was probably caused by exploding gas bottles, police said. The animals were being kept in the shed where the drugs lab, thought to be used to make ecstasy, was located.