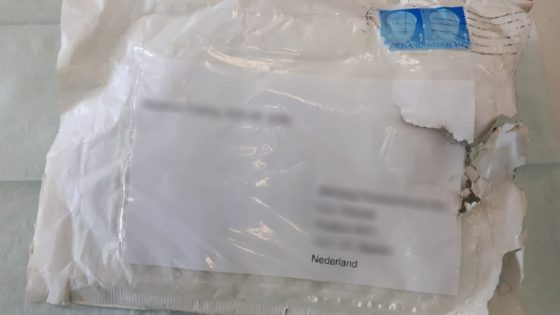 One of the most recent letter bombs. Photo: Politie.nl

A letter bomb has exploded at the headquarters of banking group ING in Amsterdam, police said on Thursday early afternoon.

The bomb went off when an employee opened the envelope at the company offices in the south of the city. The employee was checked for smoke inhalation but was thought to be otherwise unharmed.

Earlier on Thursday, another letter bomb was found at a software company in Leusden but was made safe by explosives experts.

The letter, delivered to tech company Unisys which specialises in payment traffic systems, aroused suspicion after a police warning on Wednesday when two letter bombs exploded in Amsterdam and Kerkrade. No one was hurt in those explosions.

The letters were sent by a blackmailer demanding to be paid in bitcoins.

In early January a number of letter bombs were sent to hotels, petrol stations and garages and a real estate office. All were preceded by a blackmail letter demanding payment.