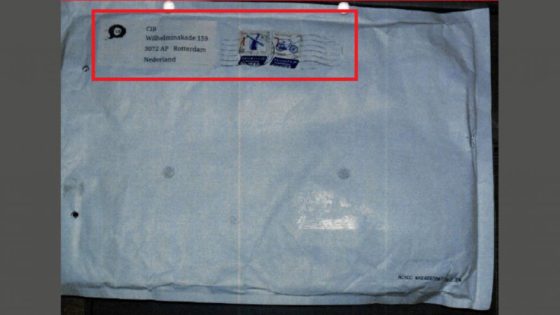 One of the January threatening letters. Photo: Politie.nl

The sender of the two letter bombs which exploded in Kerkrade and Amsterdam on Wednesday was a blackmailer demanding payment in bitcoin, police have confirmed to website Nu.nl.

The spate of letter bombs earlier in the year were also sent by someone demanding bitcoin and it is likely all the letters came from the same source, police say.

Two bombs exploded on Wednesday morning, one at an ABN Amro post sorting office in Amsterdam’s Sloterdijk and one at a Ricoh office Kerkrade. No-one was injured at either location.

A suspected third letter bomb, delivered to an ABN Amro bank branch in Maastricht, turned out to be computer mouse in an envelope.

In early January a number of letter bombs were sent to hotels, petrol stations and garages and a real estate office. All were preceded by a blackmail letter demanding payment.

Justice minister Sander Dekker said the new development is ‘worrying’ but that fortunately no-one has yet been hurt. A spokesman for the Dutch counter-terrorism unit NTBC said the agency has a coordinating role in the ongoing investigation.

In 2000 there was another spate of letter bombs focusing on Jumbo supermarkets. The blackmailer, Alex O, also demanded payment in bitcoin.