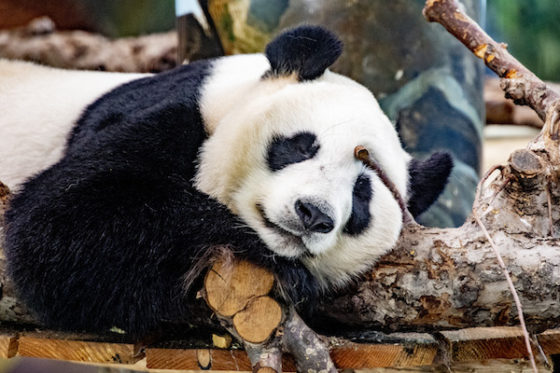 Hanging around – one of the Ouwehands pandas. Photo: Robin Utrecht

The two giant pandas on loan to the Ouwehands Dierenpark have finally been mating, almost two years since they arrived at the zoo.

Zookeepers captured the mating on camera. Female pandas are only fertile for three to seven days a year and her urine will now be tested daily to see if she is pregnant. ‘It is going to be an exciting few weeks,’ a zoo spokesman said.

Zoo officials have been doing their best to encouraging Xing Ya and Wu Wen, now both six years old, to mate since they arrived at the specially-built enclosure in May 2017.

They have been spreading each panda’s urine in the other’s sleeping area, and played Xing Ya recordings of other pandas mating. He has also been trained to stand on his back feet so he can do the deed.

‘At the end of last week, we knew Wu Wen was ready and since that moment the keepers have been busy encouraging the animals in a special enclosure,’ the zoo said. In March 2019, hopes of a successful mating where dashed because Xing Ya proved to be too young to mate.