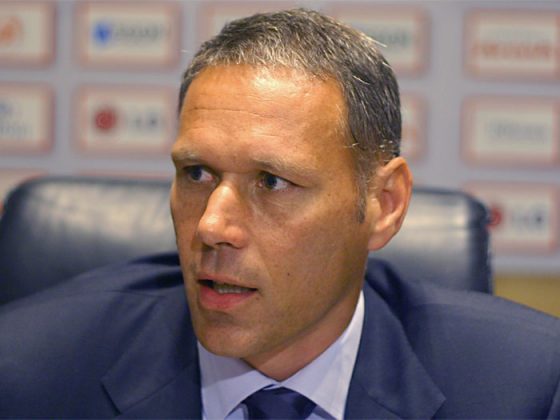 Former Netherlands striker Marco van Basten has had to apologise to the German coach of Eredivisie club Heracles Almelo for shouting ‘Sieg Heil’ across a TV studio at the end of an interview.

Van Basten made the remark off camera during the Fox Sports show Eretribune, but it was picked up by microphones. He apologised on air during the programme and later called Heracles’s coach, Frank Wormuth, to say sorry in person.

The former AC Milan and Ajax footballer said his remark was directed not at the coach but at his colleague Hans Kraay jr, who interviewed Wormuth in German. ‘I didn’t mean to shock people. It was more to explain Hans’s German,’ he said.

Fox Sports also apologised for the comments and said they would be speaking to Van Basten about his future with the channel. A spokesman told RTL Nieuws: ‘Marco has received a lot of reactions, as have we, and tomorrow [Monday] we will talk to each other again.’

The incident came at the end of a week in which racism in Dutch football was thrust into the spotlight after a match in the Eerste Divisie was suspended because Den Bosch fans subjected Excelsior striker Ahmad Mendes Moreira to racist taunts.

Wormuth said he accepted Van Basten’s explanation, but said the casual use of Nazi slogans was never acceptable. The remarks also sparked a fierce reaction from Holocaust campaigners in the Netherlands and in the German media, with tabloid newspaper Bild calling the episode ‘a scandal’.

‘He called me in the middle of the night and said it was a bad joke,’ Wormuth told local newspaper Tubantia. ‘He said it because Hans Kraay’s German is so bad and it wasn’t about me. Fine, I replied in Dutch that I didn’t feel he was talking about me.

‘In Germany you just can’t say “Sieg Heil” because of the history. That’s why they’re making such a big deal of it.’

Hanna Luden, of the Dutch Centre for Information and Documentation on Israel, said Van Basten’s flippant use of Nazi language risked trivialising the history of the Second World War.

‘We shouldn’t accuse him of having Nazi sympathies. This symbolises the period we are all living in. It seems we still need to explain very clearly why this is wrong.’