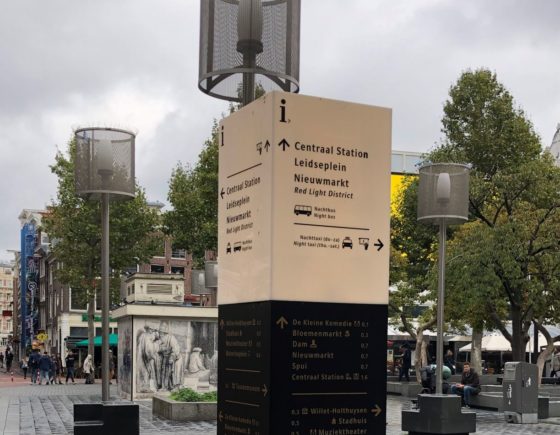 A proposal for guiding tourists through Amsterdam’s red light district with signs and a light installation has apparently been withdrawn before publication, after sparking angry responses from councillors and residents.

The city had commissioned a consultancy to draw up advice about how to lead tourists to and through the red light district, with the aim of causing less nuisance in surrounding areas.

Buro Mijksenaar proposed a physical ‘wayfinding’ system of ‘red light district’ signs, and a light projection above the streets to get tourists ‘in and out quicker’, according to a city spokeswoman. But when the early-stage proposal was discussed with locals, they escalated it to social media and it sparked outrage at a finance and economic affairs council meeting – posted online this week.

Diederick Boomsma, councillor for the Christian democratic CDA, said that any more ‘red light district’ signage would effectively brand the whole of De Wallen as an amusement park for sex.

‘It should not be in English for a start – we are the capital of the Netherlands so we shouldn’t be talking about “the red light district” – and I thought we were stopping promoting De Wallen as a prostitution destination,’ he said at the meeting.

‘You designate an area of the city as a sort of funfair for paid sex – and we should not do this. Everyone knows that tourists sometimes ask “Where are the prostitutes? Where is the red light district?” I would myself direct them to Amstelveen, but I understand if that’s a step too far for the city to do that formally. But in any case you should not formally bombard one of the city’s oldest and most beautiful areas with “red light district” signage.’

Faced with the protests, the city’s finance alderman Victor Everhardt has pledged that the wayfinding will not go down this path – although the city has not proposed alternative words that will be understandable to an international audience, and other city signage already reads ‘red light district’.

‘I hear you saying: “why is ‘red light district’ in the foreground,”’ said Everhardt. ‘This is still in discussion, also with residents, and I agree that this seems a very unfortunate choice. I don’t think these words will be used, let alone hanging over the streets in big letters. But the intention is that within the area there’s a clear route description, so you know where you should be and where you shouldn’t and wandering tourists don’t effectively make the area bigger and cause more nuisance.’

The conundrum is part of a series of measures being implemented and considered by Amsterdam city council to deal with the Dutch capital’s popularity among visitors from The Netherlands and abroad.

Following complaints about the negative effects of overtourism – and faced with huge predicted increases in the years ahead – Amsterdam city council is working on policies to put the ‘city in balance’. These include banning guided tours in De Wallen – the ancient city area better known to tourists as the red light district – attempting to crack down on holiday letting by halving the number of permitted days to 30 a year, and increasing tourist tax.

Next year, the city expects two publish two important studies into the latest tourism predictions for the years ahead, and a proposal for maintaining quality of life.

DutchNews.nl has asked to see a copy of the unpublished signage advice.