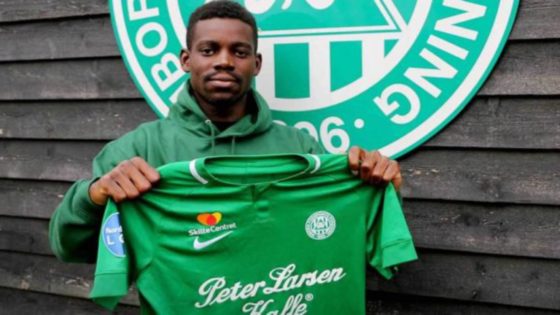 A social media photograph of Verhagen with a Viborg shirt

A Danish first division football team has filed a criminal complaint after signing a Dutchman who, the club says, had no skills and seems to have conned his way into the club.

Bernio Verhagen, 25, arrived at Viborg in October, claiming to have been on transfer from Chilean side Audax Italiano. But he was taken off the pitch at the very first training session due to his ‘footballing qualities’.

That, ‘coupled with a very messy private life’ reinforced the suspicion that something was wrong, Viborg said in a statement.

Viborg had been contacted by someone claiming to be from football agency Stellar Group about Verhagen who, he said, had a past at Moldavian side Dinamo-Auto and Cape Town City FC in South Africa.

But Dinamo-Auto has since told Reuters that they had never heard of him, while according to South African website Sowetan Live, Verhagen trained with Cape Town for two days before ‘before it was obvious he was not up to standard and sent to play with the reserves.’

The South African club had also been approached by someone imitating an agent. ‘Unfortunately we had done the paperwork but luckily no money had been paid over‚’ club spokesman Julian Bailey told the website.

Verhagen remains on the Transfermarkt.com website, and is photographed holding a Viborg shirt. His listing includes a total of five clubs that he was apparently signed to this year, and says he was a youth player at Dutch side Willem II.

Verhagen has since been arrested in Denmark on suspicion of beating up his Chilean girlfriend, theft and intimidation.