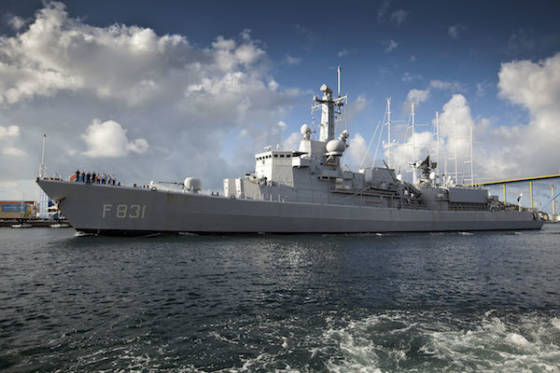 The Dutch government will contribute to a French-initiated EU mission in the Strait of Hormuz from the end of January to the end of June, the cabinet has agreed.

The aim is to enhance maritime security now that tensions in the Gulf region have risen steadily. ‘Incidents that disrupt shipping and raise uncertainty have direct consequences for the world economy including for Dutch shippers,’ the cabinet said in an English statement.

‘This has an immediate impact on Dutch economic and security interests. Safeguarding the free and safe passage of all maritime traffic in this part of the world is therefore in the Netherlands’ interests.’

The Dutch contribution will consist of the frigate Zr. Ms. De Ruyter with an onboard helicopter and the secondment of a number of staff officers to the mission’s headquarters.

The mission will also focus on the diplomatic de-escalating of tensions and this is ‘in line with the Netherlands’ own points of departure, aiming at an integrated approach to maritime security in the Gulf region,’ the statement said.

In July it emerged that the Netherlands was only prepared to comply with an American request for help patrolling the Straits of Hormuz as part of a European effort. France too had ruled out joining a US-led coalition.

The statement also said the Netherlands has also agreed to join other European countries as a shareholder of the Instrument for Supporting Trade Exchanges (INSTEX) which aims to facilitate legitimate trade between EU companies and Iran by limiting the impact on European companies of US sanctions against Iran.

The government will also ‘endeavour to increase the Netherlands’ contribution to UN missions’ and is looking at the possibilities for contributing transport helicopters to UN operations in the second half of 2021 or in 2022, on a rotational basis, the statement said.