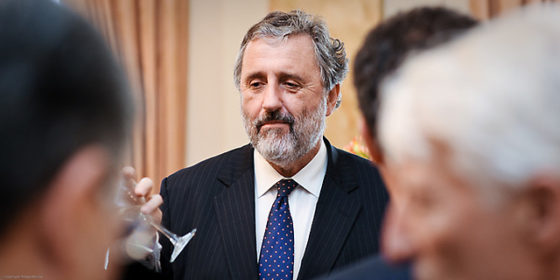 The former Dutch ambassador to the US has given an interview to the NRC in which he describes the ‘absolute mess’ in Washington under the presidency of Donald Trump.

Henne Schuwer, who retired this summer, was appointed to the US job in 2015 and told the paper that Trump is ‘sawing away’ at the fundamentals of society.

‘Of course he has done good things. More money is going to Nato and he has reformed the 1986 tax system,’ said Schuwer. ‘But he has done nothing, absolutely nothing to become president of all Americans. Only that of his own supporters. And that is why the country has been completely torn apart.’

This interview with former Dutch ambassador to US Henne Schuwer, published in Dutch newspaper @nrc , paints absolutely disastrous picture of WH and way (allied) countries deal with it. Hope they translate it. #thread https://t.co/kDtdgNt4sN

Since Trump’s election, said Schuwer, it is an ‘absolute mess’ in Washington, with Trump sidelining State Department officials who worked with diplomats. Ambassadors now start their day by scrolling through Trump’s morning tweets, Schuwer said. ‘Now everything is led from the White House.’

As a consequence, he said, ‘we have started focusing more on the states. If we can’t talk about the environment with the Environmental Protection Agency in Washington, and we can’t, then we talk to California or Oregon. So the influence of a president who is so extreme in some areas is becoming less.

Schuwer also spoke about the two visits made to Washington by Dutch prime minister Mark Rutte.

The first, in July 2018, went well, he says, with Trump saying ‘I like this guy’ after the meeting. ‘Rutte did not let Trump walk over him and he did say “no”. Before the meeting, Rutte said that “if we do not corrects the facts that don’t add up, then they will become true”.’

Rutte’s subsequent ‘no’, when Trump said that EU US trade talks would be positive even if there was no outcome, went around the world.

In order to highlight the importance of the Netherlands to the US, the embassy created a plastified A4 of facts – with icons – which Rutte slid over the table to Trump ahead of their talks.

‘It contained facts about how many jobs are created in the US thanks to Dutch investments,’ the former diplomat said. ‘We put €300bn into the US. That is an interesting amount. Trump was impressed.’

Asked about the leak of critical comments about Trump made by British ambassador Kim Darroch earlier this year, Schuwer said he had ‘concluded they don’t read Dutch that well’.

Darroch resigned after the Mail on Sunday published extracts from the memos, in which he described Donald Trump’s administration as ‘clumsy and inept’.

‘After the row we talked about our way of reporting to The Hague,’ Schuwer said. ‘We think the home front has a right to our analysis, particularly if the president’s behaviour is influencing bilateral relationships.’

‘As a diplomat you give a summary of events and your own comments. But I said we are not going to get personal. I am not going to say the man is an idiot.’