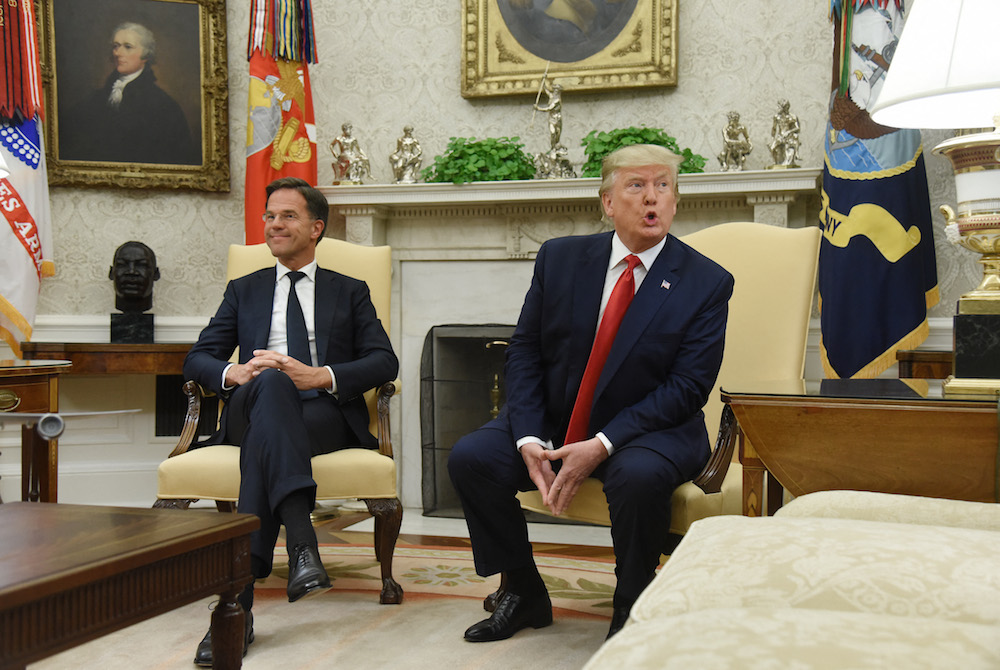 Dutch prime minister Mark Rutte and US president Donald Trump discussed trade issues and boosting the number of jobs stemming from direct investment in the two countries during their bilateral meeting on Thursday.

The aim is to boost the number of US jobs created by Dutch investment to one million and to increase the 250,000 jobs in the Netherlands which are due to American activity, the prime minister and president said.

‘The bond between NL and the US is strong and centuries old,’ Rutte said on Twitter after the visit. ‘Today I discussed the special relationship between our two countries with president Trump at the White House. I look forward to continue and intensify our cooperation.’

This is the second time the two men have met at the White House and comes at a time when the US has asked the Netherlands to contribute to two military missions abroad, one in northern Syria and one in the Straits of Hormuz.

Rutte said after the meeting he had told Trump that the requests are being considered carefully. ‘But I have not made any commitments,’ Rutte said.

During their press conference, Trump was asked about the racist chanting made during a speech at which he again criticised four congresswomen. The questioning made Rutte visibly uneasy, the Volkskrant said.

In 2017, Rutte was himself at the centre of a similar row when he told a Dutch newspaper people who are not happy living in the Netherlands and with the way things are done should leave. And in 2016, he said a group of Dutch Turks demonstrating in Rotterdam should ‘eff off’.

The visit ended with a special ceremony to hand over a US flag which flew during the Normandy landings in 1944.

My visit to the White House came to an end with a special ceremony. On D-Day in 1944, the first navigation vessels landed on Utah Beach, Normandy under this very flag. Today this flag returned home, after its Dutch owners presented it to President Trump. #NLintheUSA pic.twitter.com/POI22hb8sC

During that ceremony, Trump revealed that the US had shot down an Iranian drone over the Straits of Hormuz because it had come to close to a US ship. Without referring directly to the Netherlands, Trump again asked US allies to help the security mission.

After the meeting with Trump, Rutte headed for Boston with a trade mission of Dutch companies.