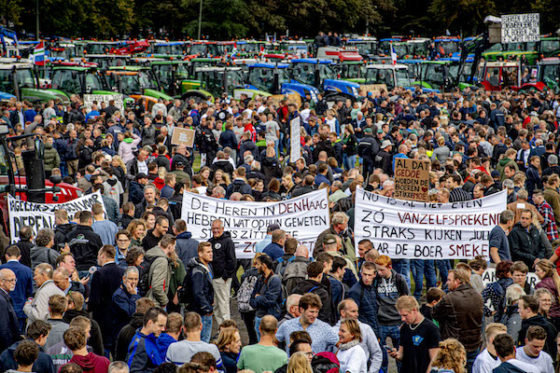 Protesting farms in The Hague. Photo: Robin Utrecht via HH

Agriculture minister Carola Schouten (ChristenUnie) has told farmers she is listening and that the number of cattle and pigs on Dutch farms won’t be halved on her watch during a speech at a large scale farmers’ protest in The Hague on Tuesday.

The minister was earlier told by the demonstration organiser and sheep farmer Bart Kemp she ‘had made a mess’ of agricultural policy.  The future of thousands of families is being put on the line by the ‘airily launched plans of Jesse Klaver and Rob Jettens’ who, Kemp said, have no idea what they are talking about.

He also said farmers are fed up with being called ‘environmental criminals’ while it is they who are producing the country’s food.

Both Klaver (GroenLinks) and Jetten (D66), who had earlier proposed farmers halve their livestock, were booed at the meeting on the Malieveld close to the parliamentary complex.

The minister, who comes from a farming background herself, said in her speech that nobody could ignore the farmers now and that she was listening.

‘Dutch farming is developing and your methods are different from those your parents used. Your children will do things differently again. That is the strength of our agriculture,’ Schouten said.

She added that as long as she was minister farmers would not be forced to cut back on the number of animals they keep.

VVD, CDA, ChristenUnie and PVV came out in support for the farmers, with CDA parliamentary party chairman Pieter Heerma saying the occasion was a ‘historic’ one. Much of the party’s support traditionally comes from farmers. Geert Wilders climbed a tractor and called the farmers ‘the heroes of society’.

Police are expecting more disruption on the roads as the farmers make their way home.

There were record traffic jams on the Dutch roads on Tuesday morning as thousands of farmers headed for The Hague to take part in in the demonstration, many of them by tractor.

Motoring organisation ANWB said Tuesday morning’s rush hour, with over 1,100 kilometres of jams, was the worst ever – with queues of 40 kilometres on the A2 from Utrecht to The Hague alone.