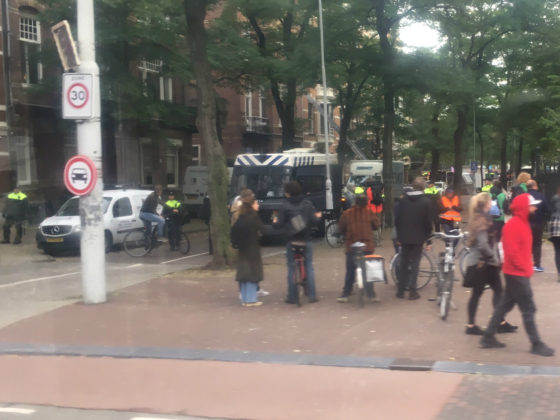 Police vans outside the Rijksmuseum during the protest. Photo: DutchNews.nl

Environmental protesters Extinction Rebellion have targeted a branch of ABN Amro bank in the Zuidas business district of Amsterdam in a follow-up to yesterday’s blockade of the Stadhouderskade.

Seven of the protesters are said to have glued themselves to the door of the building and police have been called in to keep an eye on the situation, broadcaster NOS reported.

The demonstrators also plan to put up tents and a podium in the capital’s Vondelpark. ‘We are expecting the go-ahead for this from the mayor’s office,’ a spokesperson for the group told the broadcaster.

Extinction Rebellion, an international movement which is currently organising demonstrations in over 60 cities worldwide is planning other ‘decentralised’ actions in government buildings and companies which have participated in the climate accord. It is not known which buildings will be targeted, NOS said.

Police arrested some 90 activists yesterday near the Rijksmuseum. Mayor Femke Halsema had banned the protest because the Stadhouderskade is an emergency route which has to be kept clear for ambulances and other response vehicles. All have been released and some were fined.

The activists commented they were ‘pissed off’ with the police for keeping them in a holding cell for longer than the legal limit. They also claim jerrycans filled with drinking water were kicked over on purpose. A police spokesperson confirmed to the broadcaster that some of the activists had been held for longer than the prescribed maximum of six hours.