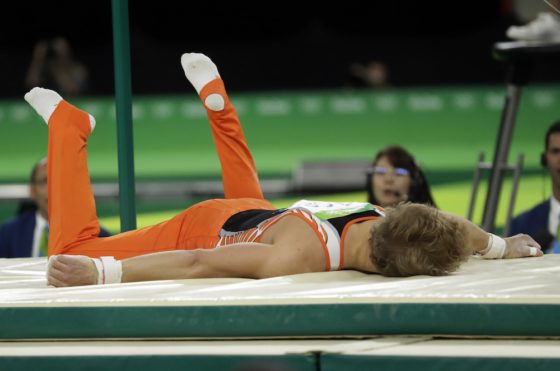 The Dutch gymnastics team have failed to qualify for next year’s Olympic Games in Tokyo after horizontal bar specialist Epke Zonderland fell at the world championships in Stuttgart on Monday.

A place in the top 12 would have booked them their ticket to the games but the team came a disappointing 17th despite a promising start in which they clocked up 240.326 points, six fewer than Germany which eventually took 12th spot.

Both Bart Deurloo and Casimir Schmidt fell on their dismounts, leaving the Dutch three points behind. Epke Zonderland’s fall sealed the team’s fate and also means he faces a battle to contest the individual title he won in London in 2012.

‘I am gutted. But we did make two big mistakes and that meant we were a bit deflated. It wasn’t a fun championship,’ Zonderland told broadcaster NOS. ‘I missed the bar, not a mistake I would have made had I been completely fit, and if I had been able to train one hundred percent.’

Although Zonderland could have secured his Olympic place, the fall means he will have to do well in the championships in the run-up to Tokyo to be in with a chance.

Bart Deurloo’s achievements in the all-round individual competition did earn him a ticket to Tokio.

The women’s gymnastics team qualified for the Olympics on Saturday after finishing fourth.