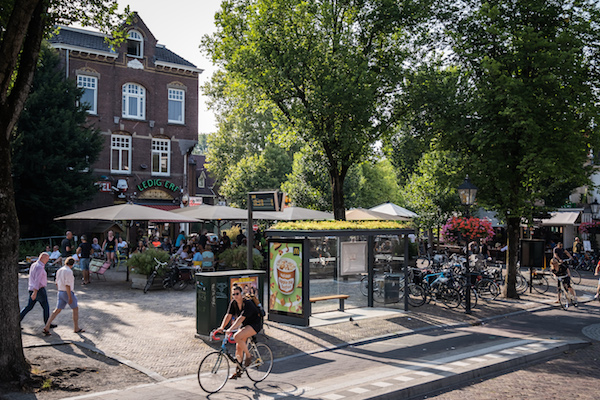 Utrecht’s bee friendly bus shelters are capturing the world’s imagination with media from across the globe reporting on a solution to urban pollution that is both simple and effective.

From Mexico City to Melbourne, local officials have been in touch about how to make bus shelters a part of efforts to combat pollution and protect bees, the Volkskrant reported on Friday.

When Utrecht city council started looking for ways of making the city more sustainable Reclamebureau Limburg (RBL), which specialises in advertising in public spaces, was quick to take up the gauntlet.

Apart from bamboo seats, RBL’s new bus shelter, of which there are now over 300 in Utrecht, has a green roof . The hardy sedum plants provided by family firm Mobilane reduce the amount of lung-damaging fine dust, store rain water and combat heat. They also promote biodiversity, and the ‘bee stops’, as the foreign press dubbed them, could well play a part in saving this endangered insect.

With July entering the history books as the hottest ever recorded the shelters were put to the test almost immediately. RBL, which built and maintains the shelters from the proceeds of advertising, told the Volkskrant that the plants survived the heat wave ‘surprisingly well’. Sedum plants need little water and are able to withstand extreme temperatures.

But convincing sceptic Utrechtenaren was not always plain sailing. ‘People in Utrecht initially said “oh not another GroenLinks scheme that will only cost tax money and won’t do anything. And will I be stung by a bee while I’m waiting for a bus?” But it’s become the summer hit of 2019,’ the paper quotes council spokesperson Jacqueline Rabius as saying.

While the sustainable shelters are not going to save the world, the 2,000 m2 of additional green roofs will contribute to cleaner air in the city and 96 of them have also been equipped with solar panels.

They are also proving a stimulus to others because requests for subsidies for green roofs have been multiplying since the bus shelters hit the headlines,’ Utrecht public space manager Maurice Prijs said. Nijmegen, Rotterdam, Hoorn and Apeldoorn are reportedly also looking into replacing conventional shelters with bee stops.

To put things in perspective, spokesperson for environmental organisation Milieu Centraal Puk van Meegeren told the paper that the effect on air quality of the shelters will not equal that of a number of big trees in a park.

‘But the shelters are a start and other bigger roofs may follow. Green roofs help to store water which would otherwise disappear into the sewage system. For homes with a flat roof they make a good alternative for air conditioning systems.’