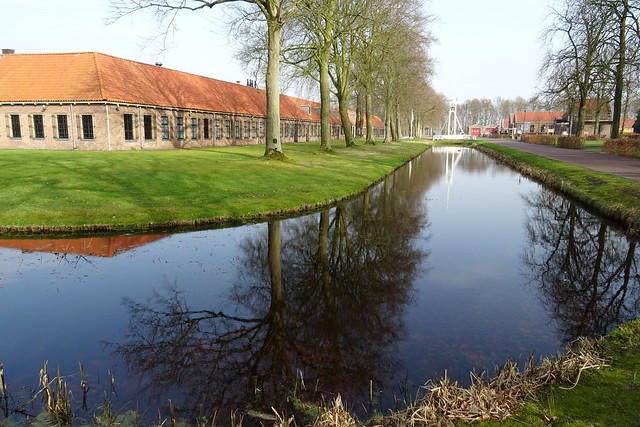 Part of the village, with the former workhouse. Photo: Sjaak Kempe via Flickr

The government is looking to sell dozens of listed buildings and over 100 hectares of land in Veenhuizen, a former ‘colony of charity’, where thousands of poor people and orphans were sent to be made useful members of society in the 19th century.

Veenhuizen, situated in a wooded part of the province of Drenthe, was an experiment to rehabilitate the city’s poor, vagrants and orphans by offering them work and an education. In1859 Veenhuizen became a penitentiary and two working prisons – not for sale – remain in the grounds.

All in all a new owner would be purchasing 114 hectares with 80 buildings including homes for former work house officials, churches, a museum devoted to Dutch prison history and a brewery. Sitting tenants are also part of the deal and existing lease agreements have to be respected, the government said.

Other stipulations say that ‘a new owner will have the possibility to follow up the special story of Veenhuizen’ and will be allowed ‘an innovative approach based on the heritage value of the buildings’. Veenhuizen has been nominated for a place on the UNESCO heritage list.

One buyer has already expressed interest but according to the rules more groups have to be able to bid. The Drenthe landscape preservation foundation, the national monuments organisation NMO and BOEi which specialises in re-purposing listed buildings have formed a consortium and unless another buyer presents himself, it will most likely to snap up the complex.

The question of what to do with Veenhuizen has been asked for decades, landscape foundation spokesman Frank van der Velden told the Volkskrant. ‘We are ready to look after it. Veenhuizen is part of what makes Drenthe Drenthe, including the landscape, the listed buildings, and the history of the place.’

Van der Velden also emphasised the importance of keeping Veenhuizen as a complete entity. ‘If this falls into the hands of a group which is not interested in the historical value, the danger is that unprofitable parts will be sold off and then the ensemble will fall apart.’

Potential buyers have until October 1 to present themselves. How much they would have to pay has not been made public.