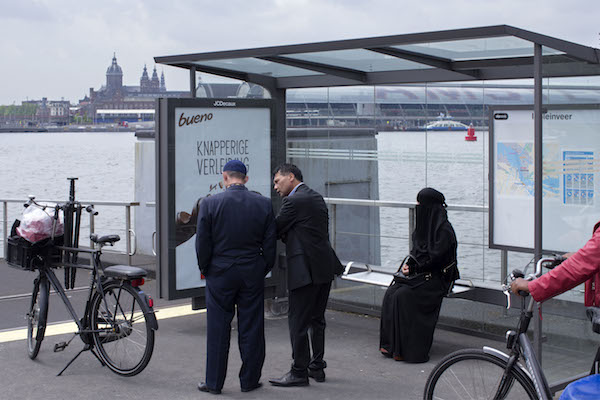 A woman in a niqab waits for a ferry in Amsterdam. Photo: Thomas Schlijper / Hollandse Hoogte

A ban on wearing face-covering garments such as a burqa or niqab in government buildings, schools and on public transport comes into effect in the Netherlands on Thursday.

The ban has been 13 years in the making and dates back to the time Geert Wilders’ anti-Islam PVV party propped up a minority government formed by Mark Rutte’s VVD and the Christian Democrats.

But much remains unclear about how the ban will work in practice, with public transport firms, hospitals and even the police saying enforcing the ban, which will affect no more than 100 to 400 women, will not be a priority.

There are also many grey areas. While the ban will be in force in hospitals, it will not apply in residential parts of healthcare institutions because they are seen as private areas, broadcaster NOS said.

The Rijksmuseum will be able to stop burqa wearers from entering, but the ban won’t apply in private museums such as Moco in Amsterdam.

Public transport chiefs have told staff that while they can inform burqa and niqab wearers that they are breaking the law, they would need to involve the police to refuse them entry.

‘We never asked for this law and the practice [of wearing niqabs] has never caused problems.’ Pedro Peters of the public transport association told the NRC. ‘Transport must always go on. We are not going to stop trams and metros because someone is wearing a burqa or motorbike helmet.’

The police have also said they will ‘not drive after a tram in which someone is sitting who is breaking the ban on face-covering clothing,’ NOS reported.

The police are also known to be unhappy that the ban will apply to police stations and say it may discourage women from making crime reports.

In some parts of the country the police offer veiled women an ‘alternative location’ where they can take off their veil, but this will no longer be possible with the new legislation, the home affairs ministry told the NRC.

Dutch teaching hospitals have also said they will not take any action to uphold the ban. ‘It is not job of the hospital, but of the police and justice ministry,’ the teaching hospital association NFUMC said in a statement.

Amsterdam’s OLVG hospital group has also said it will not take action. ‘Our policy is, if care is need, then that is what we will provide,’ spokeswoman Elles in ‘t Hout told the NRC.

And on the odd occasion veiled women do come to the hospital, they always remove them when getting treatment, she said.

Meanwhile, home affairs minister Kajsa Ollongren, who is in charge of implementing the legislation, has said she will remain talking to every sector affected by the ban after August 1. ‘A new law always gives rise to a lot of questions,’ her spokesman told NOS.

Local political party Nida, which has its roots in the Muslim community and two seats on Rotterdam council and one in The Hague, has said it will pay any fines handed out to women who break the law.

The AD, however, has asked the ministry if people who see women in a burqa can perform a citizen’s arrest.

The answer, the paper says, is yes, but it can only be done if the perpetrator is caught in the act and can be immediately handed over to the police.

‘Force can only be used to stop someone running away and could, for example, involve holding someone to the ground,’ the paper said.

France became the first European country to ban people from covering their faces in public places back in 2011 and was quickly followed by Belgium.

Since then partial bans have been introduced in several other countries, including Denmark, Germany, Spain and Italy.