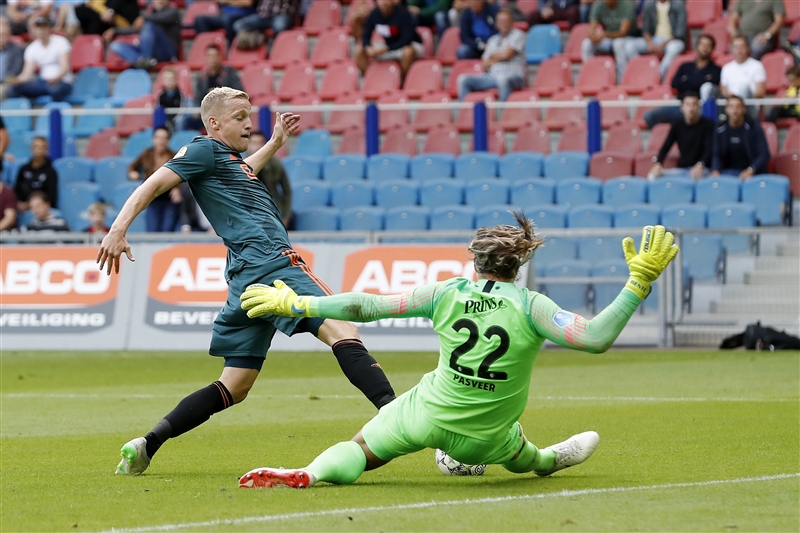 After last year’s heroics in the Champions League, Ajax have been handed a tricky task in the third qualifying round of this year’s competition, and the 2-2 away draw against Vitesse of Arnhem on Saturday was not the dream start to the national competition either.

The Amsterdammers knocked out Real Madrid and Juventus en route to the semi-finals, before Tottenham stunned them with a goal in the dying seconds. Erik ten Hag’s team seduced Europe with its adventurous style and slick, intricate passing that blended precocious talents such as midfielder Frenkie de Jong with experienced players like Dusan Tadic and Lasse Schöne.

This time round Ajax have been paired with Greek champions PAOK Saloniki, who won the league and cup double last season and went through their domestic campaign unbeaten.

The good news for coach Ten Hag is that the widely expected break-up of his team has not yet happened. De Jong’s €75 million move to Barcelona was agreed in January, while the only major departure over the summer was 19-year-old captain Matthijs de Ligt to Juventus, also for €75 million.

But with the transfer window open till September 1, Ajax face a fight to hang on to other stars such as striker Donny van de Beek. The 22-year-old, who found the net four times during last year’s Champions League run, has confirmed Ajax are in talks with Real Madrid, one of several top European clubs chasing the 22-year-old attacking midfielder. If he goes he is likely to fetch a fee of around €60 million.

Hakim Ziyech has pledged his future to Ajax after turning down a move to Sevilla, but Arsenal have not given up hope of bagging the €30 million-rated striker. Brazilian forward David Neres has been the focus of strong interest from several clubs and the 33-year-old Schöne is now on his way to Genoa.

The club has reinvested some of the millions received for De Jong and De Ligt in the team, with Dutch international winger Quincy Promes arriving from Sevilla for €15.7 million. At 27 and with 37 caps, Promes is a veteran by Ajax standards, but will add speed and penetration on either flank.

Argentinian Lisandro Martinez and Mexican Edson Alvarez, both 21, have been brought in to bolster the defence, seen as Ajax’s main weak spot last season. Martinez will team up with compatriot Nicolas Tagliafico, one of the revelations of last season, while the €15 million Alvarez has the daunting task of filling de Ligt’s number 4 shirt.

Ajax kicked off the season in impressive style with a 2-0 win over their closest rivals, PSV Eindhoven, to win the Johan Cruyff Shield. Ten Hag declared himself ‘very satisfied’ with the opening 20 minutes in particular, as his team took the lead after 35 seconds and pressed and harried Mark van Bommel’s team into distraction.

Martinez made his debut in the game and is expected to be joined on Tuesday by Alvarez, who was still waiting for a work permit. Neres and Tagliafico are also returning from an extended vacation after they played in the Copa America in July.

With PSV knocked out by Basel last week, Ajax are the sole flag bearers for the Eredivisie in the Champions League – and the result against PAOK will be a big factor in whether they can hold on to their young talents for another season.

Ajax fans are on tenterhooks as they wait to see which eleven players Erik ten Hag fields and how well prepared they are for their important game against PAOK.