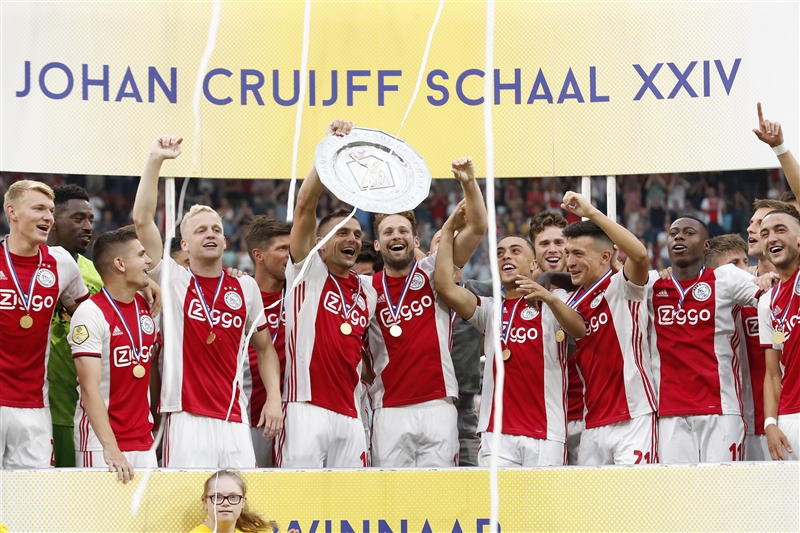 After a five-year drought, Ajax have claimed their third trophy in five matches by beating PSV 2-0 to win the Johan Cruyff Shield, the traditional aperitif to the Eredivisie season.

The Double winners got off to a flying start with a goal after just 35 seconds from Kasper Dolberg and were never seriously troubled. Daley Blind doubled the score on 52 minutes when he pounced on a loose ball after Dusan Tadic’s shot was saved.

Manager Erik ten Hag said he was delighted with the way his team started the game. ‘We played superbly, especially the first 20 minutes. We put them under so much pressure, both with the ball and in defence. The other team were gasping for breath.’

His opposite number Mark van Bommel said his players would need to ‘grow up fast’ when the league season begins next weekend. ‘We lacked the will to challenge for the ball. It’s not just about playing nice football.’

Despite predictions that the team that reached the Champions League semi-finals would be broken up, Ajax were only missing Frenkie de Jong and Matthijs de Ligt, now at Barcelona and Juventus respectively, from last season’s squad.

The match was preceded by a minute’s silence for Humphrey Mijnals, the first player of Surinamese origin to play for the Dutch national team. Mijnals, who was 88, made his debut in 1960 and won three international caps.