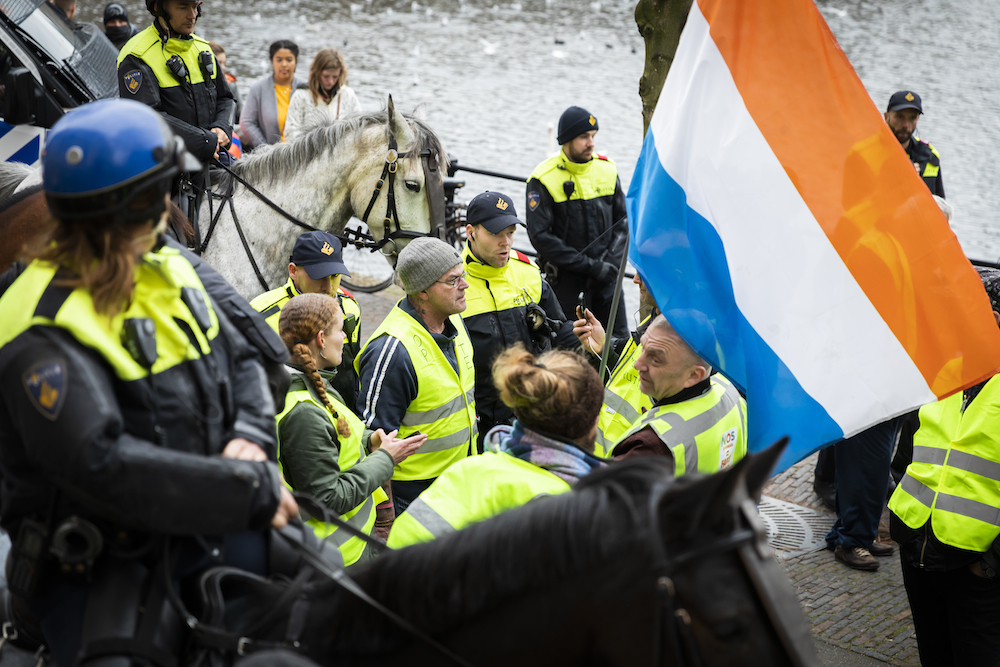 Demonstrators carrying the prinsen flag, adopted by the Dutch nazi party in the 1930s, in The Hague on Saturday. Photo: Laurens van Putten / HH

The French ‘yellow jackets’ protest movement has blown into the Netherlands, with several small demos taking place last weekend and plans for an official demonstration outside Amsterdam’s city hall next Saturday.

One group on Facebook, which calls itself Gele Hesjes NL, has over 17,000 members and describes itself as being a citizens’ movement, protesting about high prices. ‘We are a campaign group which opposes violence’, the Facebook page states.

Nevertheless, observers point out that some of the people who took part in last weekend’s demonstrations in The Hague, Maastricht and Nijmegen were known faces from Dutch far right and neo nazi movements.

The Parool, in its analysis of last Saturday’s protest, said the demonstrators’ anger was directed at prime minister Mark Rutte, immigration, the EU and anti-Zwarte Piet campaigners.

The Netherlands does not have a tradition of mass protests or mass strikes, like France or Belgium, the paper said. It points out that the Netherlands always scores highly in international surveys about happiness and satisfaction with life.

In addition, recent research by the government’s socio-cultural think tank SCP shows that people have more trust in institutions like parliament and in the legal system than they used to.

Nevertheless, Groningen University professor Kees Aarts told the paper that politicians would be wrong to dismiss the Dutch yellow jackets, however small the group.

‘Life has gotten harder for some in recent years, and that applies to all western countries,’ he said.

‘Whether 100 or 1,000 people are demonstrating outside parliament does not matter. The fact that they are there at all means you have to take them seriously.’