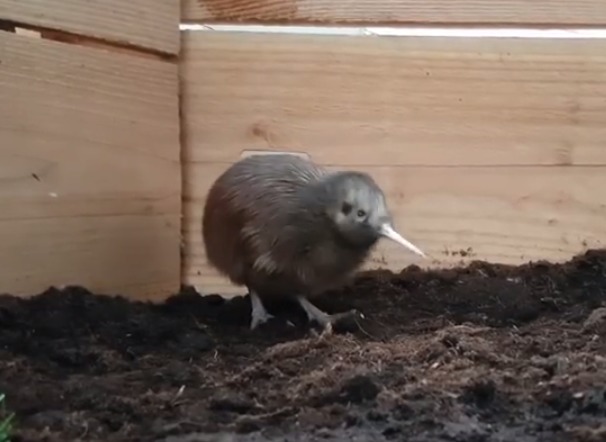 Avifauna bird zoo, one of 16 zoos in the world to have a breeding programme for the kiwi, has announced the birth of the Netherlands’ first chick.

‘The birth of a baby kiwi is very special, especially since there are only 60 kiwis in zoos outside New Zealand,’ zoo worker Dennis Appels told public broadcaster NOS.

The North Island brown kiwi is on the threatened species list because people have introduced other species to the island, for which the flightless kiwi is an easy prey.

Avifauna is the only zoo to have produced a kiwi chick this year. ‘The secret is a solicitous father and peace and quiet,’ Appels said.

It is not yet known what sex the kiwi is. This will be determined by a dna test on the animal’s feathers in a few weeks’ time.

The new kiwi will be named on Thursday afternoon in the presence of the New Zealand ambassador Lyndal Walker. ‘It will be a Maori name to honour its New Zealand origins and to show how grateful we are for getting to keep it,’ Appels said.

The kiwi, which was born on September 18 and is now some three weeks old, will be weighed and measured at 2pm each day for the public to see from Saturday October 13.