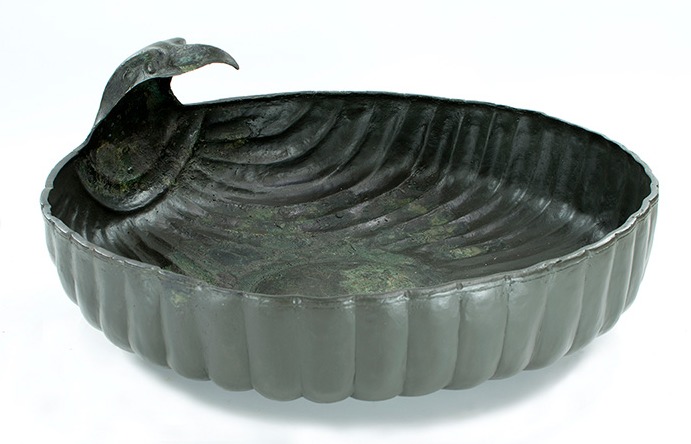 Archaeologists have found a unique Roman washing basin made of bronze in Rijnsburg in Zuid-Holland. There are some ten examples known in Europe of this kind of basin with ribbed sides but this is the only one with an eagle’s head,’ provincial archaeologist René Proos told the NRC.

The basin was found among the cremated remains of three people in a grave dating from the fourth century.  Proos said other finds, such as combs made in Northern Germany, means it’s likely the people were part of a Germanic tribe. The basin pre-dates the other objects by around 50 years.

The basin was found in pieces and it has taken a year to put it together again. The quality of the piece shows it was probably made a specialised workshop in Italy while the eagle could indicate ownership by a high-ranking Roman officer stationed at the nearby Northern border of the Roman empire.

Proos said the find could have been used to bribe a Germanic tribal chief: Roman generals and diplomats tried to buy the loyalty of local chiefs with gold, jewellery and bronze and silver objects.

Historians assumed the Romans left the Netherlands in the 3rd century. However, says Proos, this find, along with others from the last ten years, could mean the Roman army settled in the area again at the end of third or the beginning of the fourth century, perhaps by bribing the local chiefs.

The basin can be seen at the Rijksmuseum van Oudheden in Leiden from September 4.