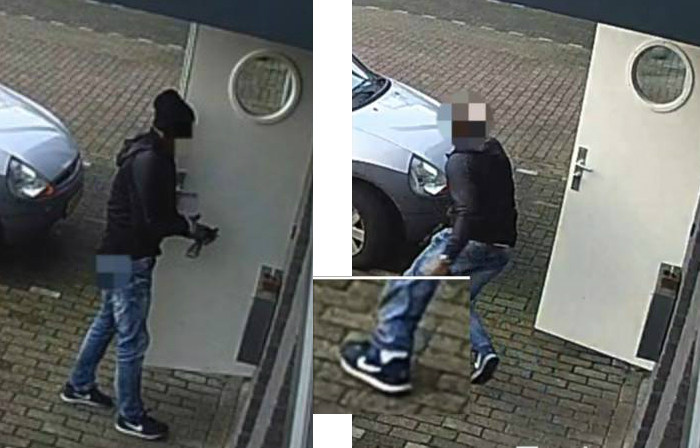 Police in Amsterdam have released images of the man suspected of shooting dead the brother of a key witness in the so-called ‘Mocro Wars’ series of gangland killings.

The man and two accomplices were arrested at the weekend, but police are still trying to trace the clothes worn by the gunman for Thursday’s shooting.

The victim, named publicly as Reduan B., was killed at his office in Amsterdam North by a man who pretended to be applying for a job. Police say B. was not involved in criminal activity, but the murder is believed to be connected to his brother, Nabil B.who is giving evidence against associates in the Utrecht underworld.

The main suspect for the killing was arrested in Hilversum on Friday evening. Police appealed for anyone who recognises the clothes in the pictures – blue jeans, a dark hooded jacket and blue and white sneakers – to contact them.

Separately, police said that a shooting at the weekend at a cafe in the De Pijp district was not connected to the dispute. Two people were injured when a gunman fired at the windows of Van Ostadestraat and Ruysdaelkade at around 12.30am on Monday.

Shortly afterwards shots were fired at another catering establishment in the Geuzenveld district, but nobody was hurt.

Nabil B. reportedly decided to testify against his colleagues after he was involved in the assassination of Hakim Changachi, in January last year. Changachi was mistakenly targeted for an Utrecht criminal and B., who arranged the getaway car, was a friend of the family.

After admitting his part in the killing to Changachi’s relatives but was then threatened by gangland associates who were angry he had broken their code of silence.

His family were initially not given extra protection despite rumours circulating in the underworld that their lives were at risk because of Nabil B.’s decision to co-operate with the authorities.

However, last Friday a family believed to be relatives of Nabil B. were escorted from their home in The Hague by a heavily armed police team, Omroep West reported.