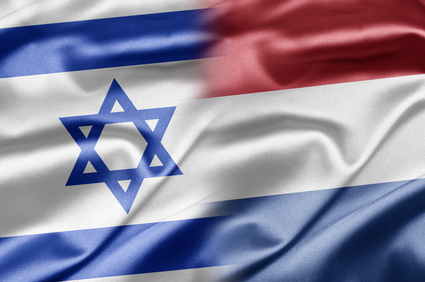 Police have arrested a 29-year-old man who smashed the window of a kosher restaurant in the south of Amsterdam on Thursday morning.

The man, who was waving a Palestinian flag and a piece of wood, smashed several windows in the Hacarmel restaurant shortly before 11am. One eyewitness told DutchNews.nl she saw the man surrounded by around 10 others. ‘The atmosphere was definitely threatening,’ she said.

Restaurant owner Daniel Baron told broadcaster RTL Nieuws that the incident had really shaken him up. ‘The consequences of what Donald Trump said have come very close to home,’ he said.

On Wednesday Trump announced that the US recognised Jerusalem as the capital of Israel and said the US would be moving its embassy there. Dutch foreign minister Halbe Zijlstra was one of dozens of politicians describing the move as ‘unwise’ and ‘counterproductive.’

‘I have never had to deal with anything like this is 17 years,’ Baron said. ‘Luckily there was no-one inside at the time.’

Police were quick to arrive at the scene and arrest the man. Amsterdam police chief Pieter-Jaap Aalbersberg told local broadcaster AT5 the man is a ‘foreigner’ with a temporary residence permit but declined to say if he is a refugee.

A spokesman for the Dutch Israeli community told broadcaster NOS the incident is ‘nothing less than an act of terrorism.’

‘This deed affects the entire Jewish community,’ the spokesman said.