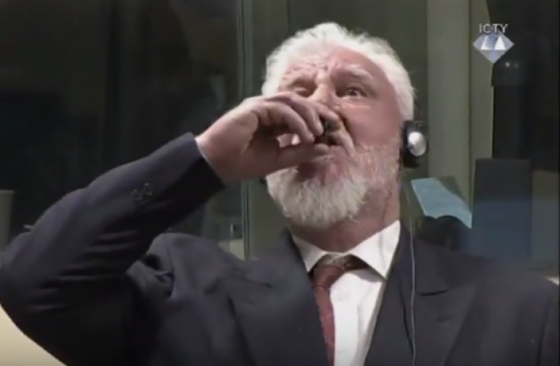 Dutch police have begun an investigation into how a defendant on trial at the Yugoslavia war crimes tribunal in The Hague managed to take poison and kill himself after hearing the verdict.

Slobodan Praljak, 72, died in hospital, after swallowing liquid from a small bottle after hearing his 20-year jail term for war crimes had been upheld.

The ex-commander of Bosnian Croat forces, who took the poison in full view of the cameras, said he was not a criminal before drinking from the bottle. As the judge continued reading, he then said: ‘I have taken poison.’

In 2013, Praljak had been sentenced for crimes in the city of Mostar during the Bosnian war from 1992-95.

How Praljak obtained the poison is so far a mystery.  Praljak has been held at a special unit in Scheveningen for tribunal suspects and is allowed free access to visitors and his legal team, broadcaster NOS said.

A Serbian lawyer who has represented suspects at the tribunal told news agency AP that it would be easy to smuggle in a liquid. ‘They check you for metal objects. Pills or small amounts of liquid would not be discovered,’ he said.

Wednesday’s session was the final one to be held at the court since it was established by the United Nations in 1993, two years after the end of the war.

Dutch justice minister Ferdinand Grapperhaus told reporters later that he did not think the Netherlands’ reputation as host of the tribunal had been damaged by Wednesday’s shock death. ‘The Netherlands has always had a very good reputation and has acquitted itself well,’ he said.

The court room has now been declared a crime scene.

Dutch lawyer Erik Kok, who worked at the tribunal from 2006 to 2011, told RTL Nieuws it is strange that Praljak took his own life now.

Although he had been sentenced to 20 years in jail, most people are released after serving two-third of their sentence. Given that he had already been in jail for 13 years ahead of the trial, he would have been released in the very near future, Kok said.