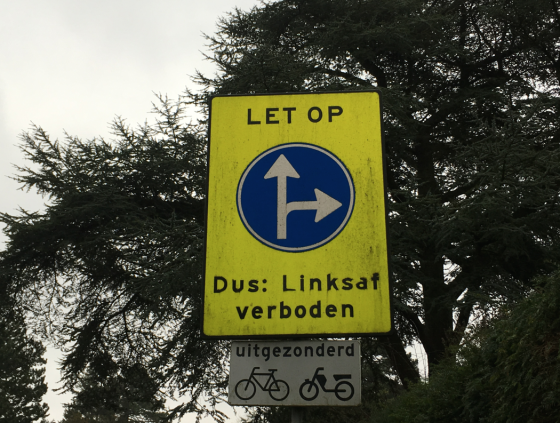 What better thing to do at the end of summer than brush up your knowledge of the Netherlands with our very own inburgering course.

Normen en waarden – when the Dutch aren’t arguing or worrying about them, they’re telling everyone else to observe them. They are frequently mentioned during election campaigns but nobody seems to be quite sure what distinguishes the normen from the waarden. Here’s an incomplete list.

1 Speak your mind
Yes, you can say judges are nuts and parliament is fake to your heart’s content. It’s only a problem if you use your freedom of speech to make discriminatory comments, insult a group within society, or incite hatred and violence. The exact definition of these offences is the subject of endless debate in the courts and newspaper columns.

It is also against the law to say nasty things about the royals. In 2016 a man was jailed for 14 days for deliberately insulting the king by describing him on Facebook as a murderer, a rapist and a thief. Until recently the offence of ‘lèse-majesté’, or ‘offending the dignity of the monarch’, could put you in the nick for five years. The penalty was recently adjusted to a maximum of four months.

2 Don’t discriminate
It’s the first line of the Dutch constitution, though it has come under pressure in recent years from Geert Wilders and his crusade to shut down mosques, close Islamic schools, ban headscarves and the Koran. And the tax office scandal clearly showed how endemic the problem is.

Various monitors appear to show a rise in reports of discrimination on the grounds of ethnicity, religion, age and sexual orientation over the past few years. However, no one seems to know if there has really been an increase or that people are just more willing to talk about, and report it.

During the coronavirus pandemic, anti-vaxxers and conspiracy theorists claimed they were being discriminated against for their views.

3 Men and women are equal
The Netherlands is a country where most women work part time and consequently continue to earn less than men, although changes are happening, albeit slowly. Men now get more than two days paid paternity leave, for example.

It is, however, also work noting there is a party with three seats in parliament – the fundamentalist Protestant SGP – which believes women should not vote, work or wear trousers. And over 200,000 people vote for them, every election.


4 LGBTI rights
Gay or straight or anything in between, the Dutch are rightly famous for their enlightened views on the matter. However, although the Netherlands legalised gay marriage in 2001, there was massive opposition to the move in parliament, particularly from the religious parties and a large section of the VVD (which now consider gay rights to be perfectly all right).

Other countries have also been catching up. According to LGBTI lobby group COC,  the Netherlands is currently ‘lagging behind in 12th place’ in Europe when it comes to equal rights, inclusion and acceptance, regardless of sex, gender identity, gender expression and sexual orientation.

5 Worship whoever you want
Article 6 of the Dutch constitution clears the way for everyone worship whoever they like. Around half the population claim to be religious and attend services. Religious groups are also free to set up their own schools, which has led to problems, particularly with the employment of gay teachers at orthodox Protestant schools, civic education courses and even outing gay pupils.


However, the number of people in the Netherlands describing themselves as atheist or agnostic outstripped those who are religious for the first time in 2022.

6 Be normal
Aside from the official norms and values which the government would have us all observe there are of course many other typical Dutch values which all contribute to the joy of being normal.

They are probably best summed up by that delightful little motto Doe maar gewoon dan doe je gek genoeg – be normal, because that is crazy enough. This entails not putting on airs and graces, not earning too much and not talking about money.

This is, of course, a sharp contrast to the obsession with the Netherlands’ performance in international rankings – whether it be university performance, competitiveness or best places to live – no matter how flimsy the research.


7 Participate
This concept was launched by king Willem-Alexander when he made his very first speech from the throne in 2013 – but of course it was done at the instigation of the government.

The aim, the king said, was to leave behind the ‘classic welfare state’ and switch towards a ‘participation society’ in which people take control of their own lives – which, in VVD terms, usually means less government money.

As the participation declaration states: ‘In the Netherlands, we ask all citizens to contribute to a pleasant and safe society, for example, by working, going to school or doing voluntary work.’ Even queen Maxima did her duty as a nit mother at her daughters’ primary school all those years ago.