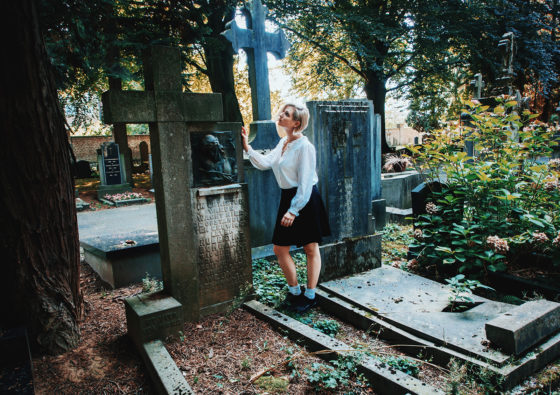 Dark tourists on a quest for the Netherlands’ nastiest narratives raises ethical questions about the commodification of some of the country’s most solemn sites. But condemning the practice without considering its context, say some, misses the point.

Amsterdammer Claudia Crobatia has visited many cemeteries, but mostly as a tourist rather than a mourner.

‘It’s the closest you can get to the mystery of death itself,’ says the death awareness coach, who founded A Course in Dying in 2016 to help reconcile people with their own mortality. ‘There’s a spark of hope that these places can tell us a little more about the meaning of it all and what happens when we die,’ she told DutchNews.nl.

With an archive of cemetery reviews, as rich in gothic atmosphere as in historic detail, Crobatia is one of the Netherlands’ most inquisitive dark tourists, sharing her unique aesthetic with over 13,000 instagram followers. She talks of feeling ‘a sense of inspiration and awe’ during her eerie expeditions, which recently included the discovery of a rare cadaver monument on the tomb of one of her ancestors. ‘To me, these places are so special, so I really want to share them with other people as well,’ she says.

What is dark tourism?

Dark tourism or ‘thanatourism’ is the practice of visiting sites associated with death and suffering. Here in the Netherlands, dark destinations range from the hammed-up horror of the Amsterdam Dungeon to poignant memorial sites such as Kamp Westerbork in Drenthe, where from 1940-1945 the Nazis detained Jews and Roma before deporting them to death camps in Germany and Poland.

The term ‘Dark Tourism’ is thought to have been coined as recently as 2000 by academics Malcolm Foley and J. John Lennon in their publication Dark Tourism: the attraction of death and disaster. But there is nothing new about the phenomenon. Until the 1790s, rowing across the IJ harbour to Amsterdam Noord to witness a public hanging was a popular day trip, and from the 16th-19th century, the Anatomical Theatre of Leiden University drew groups of onlookers to its cabinet of curiosities and the central spectacle of human dissection. 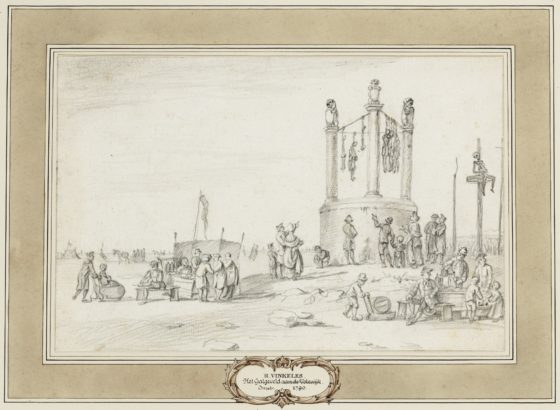 The ethics of dark tourism

Crobatia is well aware of the stigma associated with dark tourism. ‘When people hear that I take pictures or create videos or content at cemeteries, they are a little bit afraid that it might cross one of these lines of respect,’ she says. ‘But when they see my work, they see that it’s just a beautiful document of the place itself and of the history.’ ‘I’m always very careful to not take pictures of very new graves,’ she explains. ‘I don’t want to trigger the family of someone who has recently lost someone.’

Charley Boerman, a lecturer on the ethics of tourism at Radboud University, believes that the code of conduct for dark tourists is further complicated by the packaging of many sites of suffering, such as the Anne Frank House, as tourist destinations. Justin Bieber’s controversial comment in its visitors’ book in 2013 that Anne was ‘a great girl’ who hopefully would have been ‘a belieber’ (his fan), is a good example, says Boerman, of the challenge of reconciling what she describes as ‘the weight of the Holocaust and the symbol of that house’ with an experience that is now at the top of the tourist tick list.

‘These sites which feel very sacred are also subject to standard tourist practices such as selfie taking and locating the iconic symbol of a site to communicate to your followers that you’ve been there,’ Boerman says. ‘If it’s a very important experience for you, you would want to take a picture,’ she acknowledges, but your intention is key. ‘The problem with a selfie [at a Holocaust memorial site, for example] is you place yourself front and centre of a site which commemorates six million.’

When you come to @AuschwitzMuseum remember you are at the site where over 1 million people were killed. Respect their memory. There are better places to learn how to walk on a balance beam than the site which symbolizes deportation of hundreds of thousands to their deaths. pic.twitter.com/TxJk9FgxWl

What makes a dark tourist?

Of course, not everyone who visits a place of death or suffering is a dark tourist, says Boerman. ‘At the Holocaust Monument [in Amsterdam] there were people like me who were interested,’ she recalls, ‘but there were also whole families with lists of names who could finally pay respects to their loved ones and their ancestors.’

Die-hard dark tourists, by contrast, are often chasing the spooky or seeking some kind of spectacle. ‘Part of the appeal is thrill-seeking and voyeurism, but a lot of other people also say they go because they want historical understanding and empathy with victims,’ says Boerman. ‘I’ve also read accounts of people really looking for this overwhelming sense of sadness that you can feel when you are at a memorial site, almost chasing that feeling as if it’s a life-changing experience to be confronted with something so atrocious, so big or so sad.’

In this way, some dark tourists may be seeking something life-affirming and cathartic by visiting these sites, says Boerman, going on to outline the philosophical concept of the sublime. ‘If you encounter something that is so much bigger than yourself, so much larger than life, you feel your own finitude − but you are actually not in danger, you can step away from it,’ she explains. ‘For some people, maybe unconsciously, these encounters with death or death sites make them feel more alive.’ 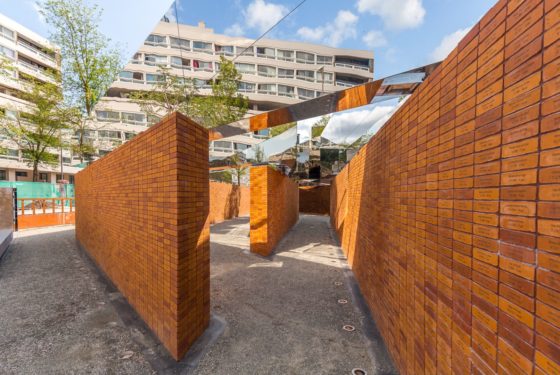 Exploring death from a distance

Narrowing this distance with death is central to Crobatia’s work and her desire to destigmatise the visiting of death-related sites. ‘Death is one of the most normal and natural things in life, when you think about it,’ she says. ‘You saw it in your environment a lot more [before] … It’s all just hidden away now. Even being able to wash or dress the body of a [deceased] loved one, it’s just not a normal thing for people to do any more.’

Crobatia is not alone in seeing the benefit of more visitors to memorial sites. ‘I have been having a lot of conversations with people from cemeteries, especially in Amsterdam, who … want to involve the community and the people more in their cemetery so that people can come for different reasons and really enjoy the space there,’ she says. ‘I guess I want to break that stigma that these places are scary or dark. They are really just beautiful parks of remembrance.’

10 Dark destinations in the Netherlands

Anne Frank House – The secret annexe where teenage diarist Anne Frank hid from the German occupiers during World War Two is the Netherlands’ most famous tourist attraction and a good example of a destination which is undoubtedly dark, but appeals to a broad range of visitors due to its historical importance.

Funeral Museum – This small museum within the charming arboretum of the Nieuwe Ooster cemetery in Amsterdam exhibits various funereal artefacts alongside a changing art exhibition relating to themes of mortality.

Bloemendaal War Cemetery – After the Second World War, over 400 bodies were found in the dunes east of Haarlem, many of them resistance members executed by Nazis. Some were returned to families, others now lie in this cemetery – a monument to the sacrifices they made. Among them is Hannie Schaft, known as ‘the girl with the red hair’.

Rijksmuseum de Gevangenpoort – In medieval times, the guards in this foreboding prison in the centre of The Hague tortured, punished and executed their wretched captives. The range of sadistic devices they used is on display.

Oranje Hotel – This former Second World War prison in Scheveningen whose inmates included Surinamese resistance fighter Anton de Kom, opened as a commemorative centre in 2019. Cell 601, where prisoners on death row awaited their fate, has been preserved, along with the inscriptions they carved into the wall as they counted down their last days.

Kamp Westerbork – Originally set up by the Jewish community to house refugees fleeing persecution in Austria and Germany, Westerbork later became known as the Gateway to Hell when it was taken over by the Nazis and used as a transit camp for Jews − Anne Frank among them − en route to concentration camps such as Bergen-Belsen, Auschwitz and Sobibor. Today, little remains of the original camp, but there is a museum and archive centre and self-guided walking and cycling tours around the site. 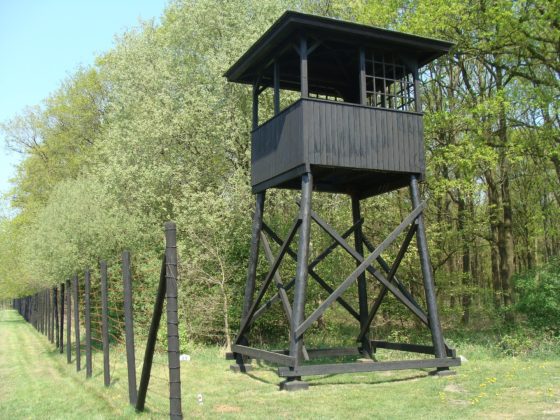 Kamp Amersfoort Once a Dutch army barracks, in 1941 the site was used by the Nazis to incarcerate religious minorities and other prisoners of war, an estimated 70% of whom would be transferred to forced labour camps they were unlikely to survive. There is a memorial centre and recently opened museum.

Museum Vrolik – The curiosity cabinet tradition saw the upwardly mobile competing to collect exotic oddities, while scientists’ strange specimens frequently drew crowds. The creepy collection of the University Medical Centre dates back to the 18th century and includes conjoined twins, a case of cyclopia, and skeletons diseased with rickets and syphilis.

The Weigh House – This museum in Oudewater in Utrecht Province tells the chilling story of how wayward women were weighed to see if they were witches and, if this was confirmed, then burnt at the stake. The museum is best known for its giant 15th century wooden scales where visitors can weigh themselves to see if they pass the test.

The Bunker of Arthur Seyss-Inquart – Devastating plans were drawn up in this eerie underground lair in Appeldoorn which once belonged to Arthur Seyss-Inquart, Reich Commissioner for the Nazi-occupied Netherlands. After the war, he was found guilty of war crimes against humanity at the Nurenberg trials and sentenced to death by hanging. Visits by appointment only.