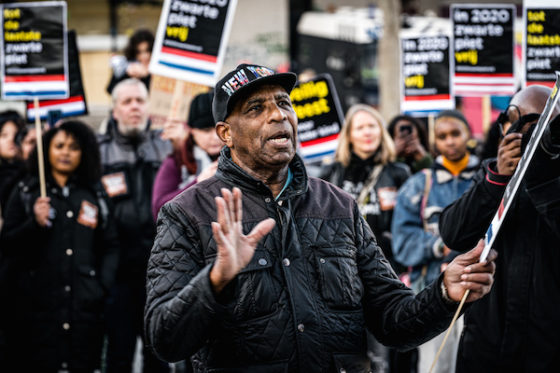 We are writing to you because of your deafening silence concerning the violence against anti-Black Pete demonstrators and your failure to respond to our invitation to discuss institutional racism in this country.

You recently said you would ‘analyse exactly what it is this group wants’. Recent events  demonstrate yet again how important it is that we should have a discussion about institutional racism. Peaceful demonstrators were assaulted and shouted at in Groningen and Leeuwarden, Excelsior player Mendes Moreira had to suffer racist chants in Den Bosch and on social media a video was posted in which a dark-skinned girl was called Zwarte Piet by an older white woman in a train.

Kick Out Zwarte Piet (KOZP) has been organising peaceful protests since 2014 to accomplish a visible change to the Sinterklaas celebrations and to promote a public debate on racism in Dutch society.  In recent years our constitutional and fundamental rights have been compromised more than once. Our freedom of expression, assembly and demonstration and right to equal treatment have been violated repeatedly.

In 2017 a group that has become known as the ‘blokkeerfriezen’ effectively blocked our demonstration for which they received a sentence in court. Last year demonstrators in Eindhoven, Groningen and The Hague – a stone’s throw away from parliament – were physically assaulted by hooligans and radical supporters of blackface Pete.

More recently hooligans and right-wing activists mobilised across the country  to attack peaceful demonstrators. Police protection ensured most of the demonstrations could take place, but in Groningen and Leeuwarden protesters were still pelted with objects.

The KOZP group in The Hague felt compelled to cancel their peaceful demonstration along the route of the Saint Nicolas parade due to the threat of violence. Our request to deliver a petition to the Dutch parliament was rejected because the police did not consider it safe enough.

The act of terrorism at our national conference (8/11), where hooligans armed with clubs and heavy fireworks barged in on the meeting, formed a dangerous and all-time low in the list of hostilities perpetrated on KOZP. The school building, which was the venue of the conference, and cars (including the car of one of the organisers) were severely damaged. We were lucky that no one got physically hurt.

Experts, such as social psychologist Kees van den Bos, have pointed out that pro-blackface Pete supporters are becoming increasingly radicalized and the threat of violence needs to be taken seriously.

We feel that it is irresponsible and unworthy of a prime-minister to keep silent on this issue, particularly in the light of the recent attack on the KOZP meeting. In our view, the attack was also an attack on our democracy. If an organisation with a different opinion cannot hold a meeting in safety anymore, what good is the constitution?

How would you have reacted if a group of hooligans with clubs had stormed a congress of the VVD or another political party?

In the past you had no trouble to use powerful language. You told Turkish-Dutch demonstrators to ‘piss off’  and you are quick to characterise groups as scum and criminals. However, there are also criminals that you do not dare to address, and there are Dutch people who you leave behind.

The Dutch national team has given the right example by issuing a powerful statement condemning racism in football . The same hooligans who called Ahmad Mendes Moreira a ‘n*gg*r and ‘cotton picker’ and called him Black Pete, attempted to attack KOZP protesters in Den Bosch on the same day.

You called the racist comments against the player ‘really terrible’, ‘fundamentally wrong’ and ‘stupid’. Why did you condemn the racism during a football game and ignore the racism and violence against demonstrators?

We would like to meet you to ask you to unequivocally condemn the violent actions and anti-black racism of the blackface Pete supporters. We want you to show the Dutch people that violence and racism are unacceptable.

We urge you not to support intolerance and to give the right example. If you do not, we fear the violence of the blackface Pete supporters will only increase and we must, together, prevent  fatalities from happening.

We look forward to your response. If you do not wish to meet with KOZP,  we would very much like to know why.

This letter was published earlier in the NRC