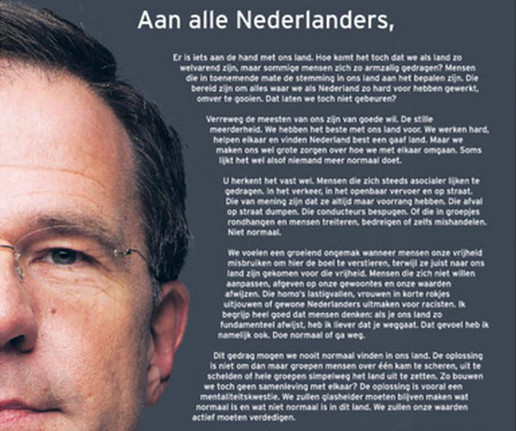 The call to ‘all Dutch citizens’ to ‘act like a normal person or leave’ by prime minister Mark Rutte, which was published in all the major newspapers on Monday, is widely viewed as an attempt to win over the PVV vote.

According to the NRC, the prime minister’s call was ‘not at all aimed at all citizens but at the ‘silent majority’ bothered by the influx of people ‘from outside’. And as that group is supposed to be the main cause of many social problems the prime minister’s solution is a prompt and one-dimensional ‘act like a normal person or leave,’ the paper writes.

The VVD leader is ‘making eyes at voters who think the Netherlands which has a Muslim population of 6% is in the grip of ‘islamisation’ and that the 26,000 asylum seekers who entered the country in 2016 constitute a ‘plague’, the NRC writes.

Not ignoring feelings of unease in the population is a good thing, the paper says, but ‘the way the prime minister insinuates that people ‘from outside’ are ‘abusing our freedom to mess things up’ is far from normal.

Native Dutch too will have to explain their actions if they abuse ambulance staff, discriminate, or display other forms of bad behaviour. The Rutte solution of leaving is not applicable to them. (..) Rutte labels criminality and anti-social behaviour as a conflict of values be solved by a one way ticket. If only it were that easy. But we must treat and punish people who commit crimes equally’, the paper concludes.

For years this prime minister was only interested in getting down the budget deficit and using the support of the PVV did not seem to bother him at all, the Volkskrant writes in its editorial. But in 2014 ‘the prime minister, in a reaction to the anti-Moroccan chant provoked by Wilders suddenly decided to react like a prime minister. ‘Words have meanings. I think Mr Wilders is contributing to the weakening of society,’ Rutte has said.

Now his ‘pleur op’ (bugger off, DN) has become a campaign slogan, the paper writes. It suggests that ‘people who fail to adjust to the rules’ are mainly to be found in a certain quarter.

‘The prime minister’s  false naivety is shining through when he says that the option to leave it open to all. He has let Wilders drag him down to his level’, the Volkskrant concludes.

Trouw paper notes that not only did the prime minister try to overshadow the PVV with his letter but that he also stole Lodewijk Asscher’s thunder.

‘The advertisement in yesterday’s newspapers will very likely prove to have marked the start of a tough election campaign, tougher than the Netherlands has ever seen, conducted in the old and new media,’ the paper concluded.