The 11 cities of Friesland very occasionally host a gruelling 200 kilometre skating race – if temperatures dip below zero for long enough, and just recently a swimming marathon. But you can also travel the famous route by bike, by boat, on horseback, on foot… however you like. Fansels! (That’s Friesian for ‘of course’).


1 Dokkum (the only one of the 11 without a different name in Friesian)
In olden times Dutch school children were taught that ‘Bonifacius was killed at Dokkum’. Bonifacius, or Winfrid of Wynith, was an 8th century Anglo-Saxon missionary who went around converting barbarians to Christianity very successfully until he met his match in the Friesians who killed him for his pains. 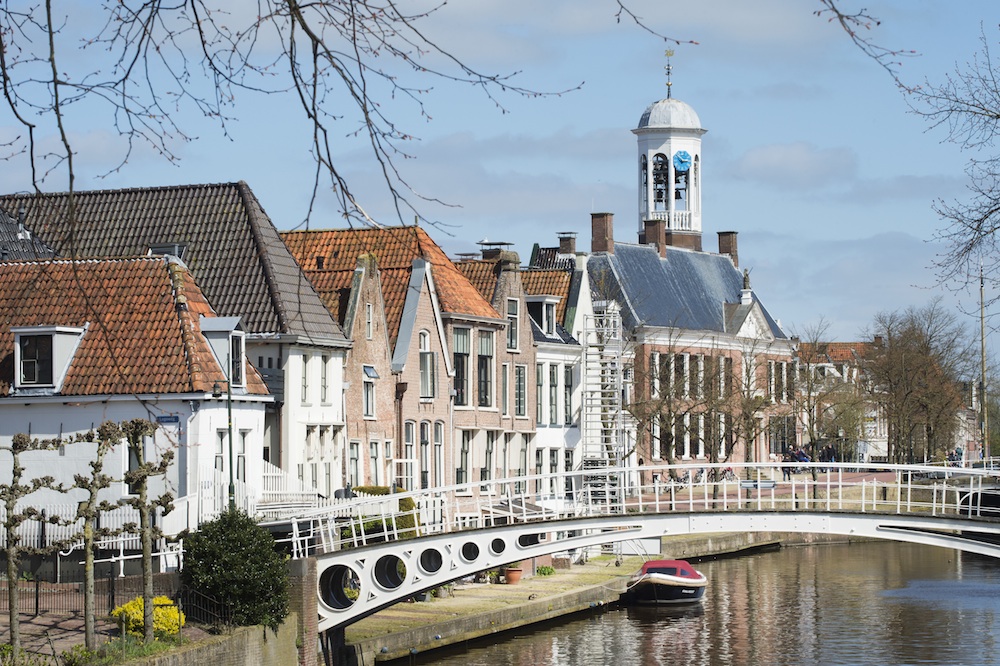 The town has done very well out of Bonifatius ever since and you can even do a Bonifatius route. Dokkum has some beautiful historic buildings and boasts the oldest weekly market in the country.

2 IJlst (Drylts)
A place of pilgrimage for true skating fanatics: here stood the famous Nooitgedagt factory which made the wooden skates that still sees many a pensioner glide elegantly over the ice, hands on his or her back. Van geslacht op geslacht: Nooitgedagt was its slogan: from generation to generation: Nooitgedagt. 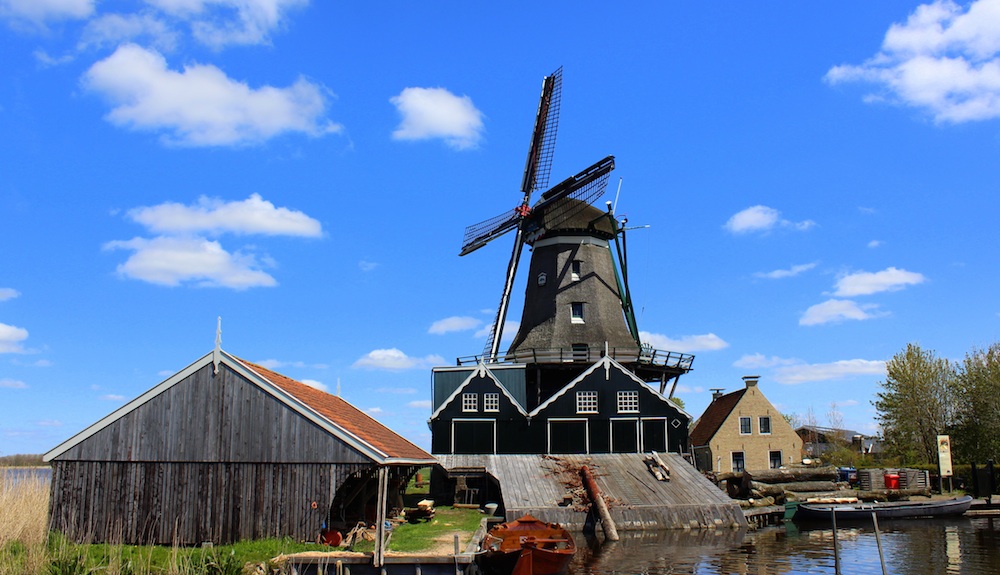 Nooitgedagt no longer exists but one of the factory buildings is still standing and houses a museum. IJlst is also home to a rather fine sawmill.

3 Workum (Warkum)
Workum is home to the popular Jopie Huisman museum. Huisman was a self-taught artist who specialised in the realistic depiction of workmen’s tools and dress. The town’s annual ‘strontrace’ or ‘shit race’ is a reconstruction of the journey made by sailing ships transporting  manure to the bulb country in the province of Zuid-Holland. 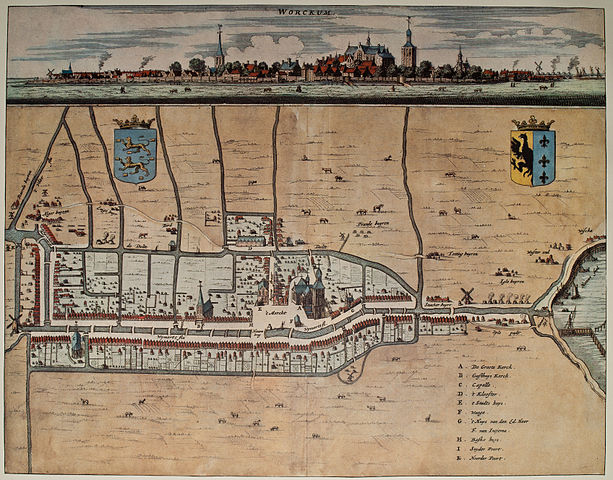 The arrival of artificial manure stopped the Friesians from turning muck into brass but the old sailing ships – no motors allowed – are still a splendid sight.

4 Leeuwarden (Ljouwert)
Leeuwarden boasts the country’s ‘most underestimated’ city centre, according to its tourist website. The home of Mata Hari and Escher, Leeuwarden has some great cocktails and some nice little museums. So much so, you could spend a weekend there.

5 Franeker (Frjentsjer)
Franeker hosts the most important annual kaats competition in Friesland called the P.C. (the letters stand for Permanent Committee, the body that started organised kaatsen in 1854). The Eise Eisinga planetarium is also worth a visit. 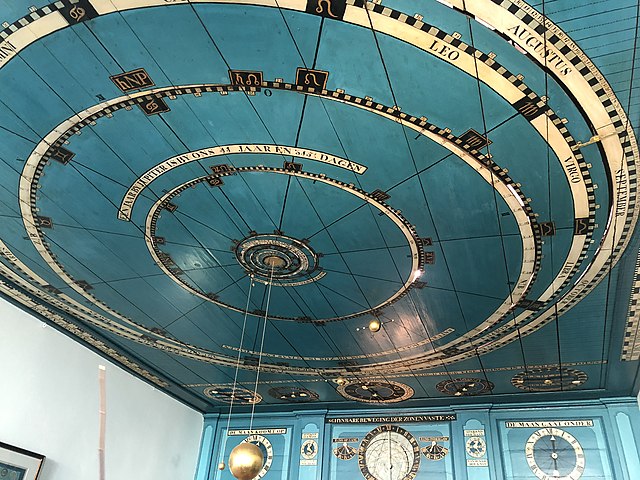 Eise Eisinga carded wool for a living like his father before him but was also seriously clever. He built the planetarium to show that the 1774 convergence of several planets would not result in the end of the world as some apocalyptic scaremongers had people believe. Of course he was right and his planetarium, the oldest working planetarium in the world, is still here to prove it.

6 Harlingen (Harns)
Its strategic position on the WaddenSea secured Harlingen’s future as a prosperous trading city. It is also said that its early orientation on outside trading partners, Amsterdam among them, accounts for its uneasy relationship with the other 10 elfsteden towns. 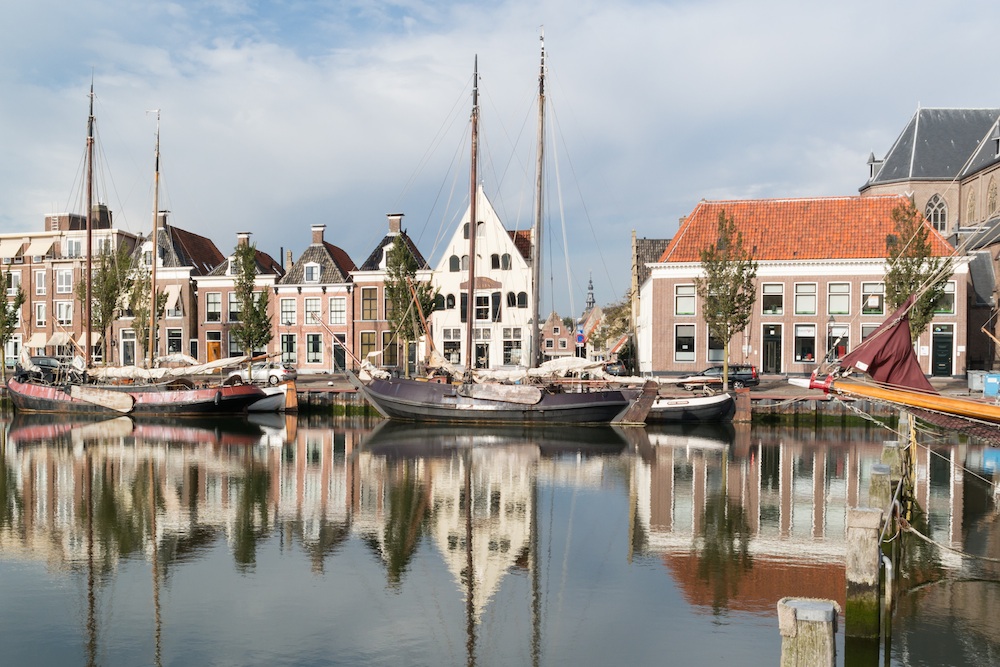 The Friesian language, for instance, is barely spoken in Harlingen. The town has many historical buildings and if you should decide to spend the night you can do so in the local light house or, alternatively and excitingly, dangling from a 17 metre high crane in the harbour.

7 Hindeloopen (Hylpen)
Hindeloopen is another port town. Its peak came in the early 17th century but, unlike its much bigger neighbour to the north, it is now content to be just a cute tourist destination. 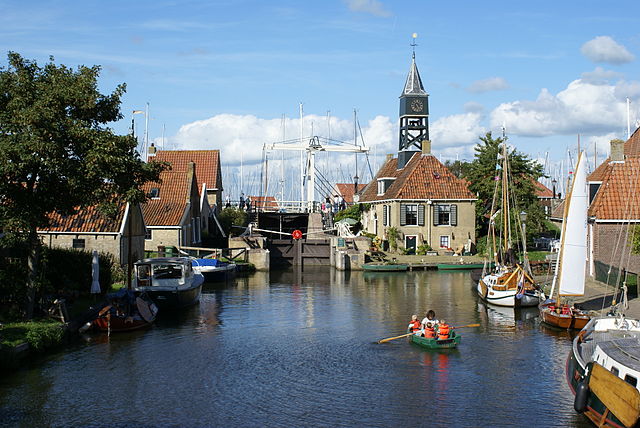 The Hindeloopen painting style – flowers and curlicues on a white, green, red or blue background – is the town’s main claim to fame. The people of Hindeloopen couldn’t get enough of it and covered absolutely every piece of furniture in it. The Hindeloopen  Museum has lots of examples and more Hindeloopen history – including skating.

Bolsward (Boalsert)
Boslward is where weary skaters and cyclists stop for a pick-me-up. It is home to Sonnema Berenburg and Friesian micro brewery Us Heit (which makes a special Elfsteden beer and also produces a single malt whisky). 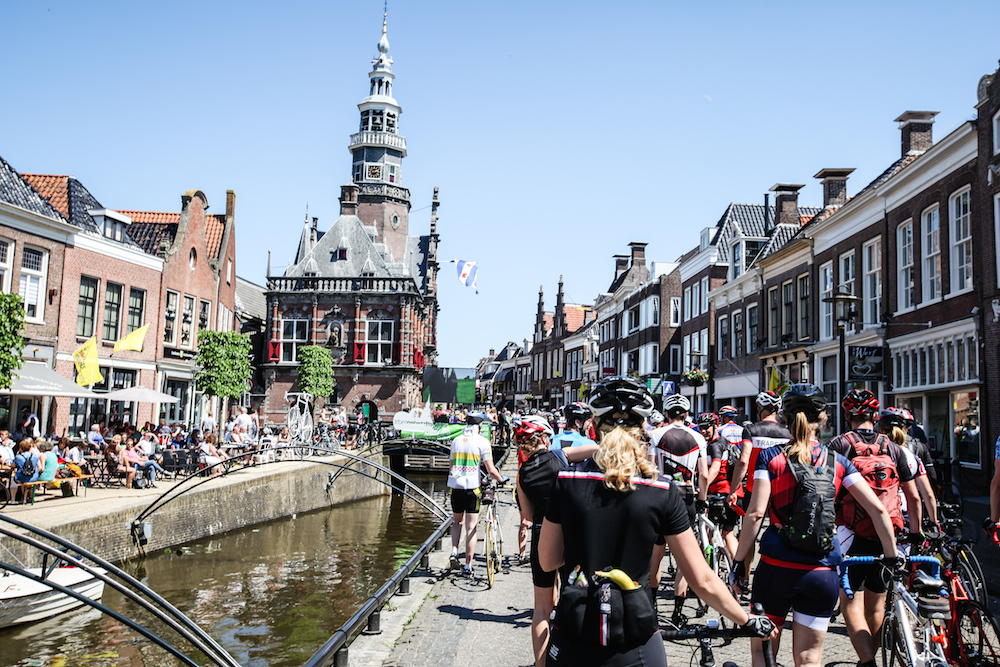 Cycling the 11 city race is a tradition at Whitsun. Photo: Maarten Boersema

Bolsward was built on three terps, or man-made mounds. The Sint Martini Church stands on the oldest one and Bolsward is one of the oldest cities in the Netherlands.

9 Sneek (Snits)
Sneek is famous for its annual water sports festival Sneekweek when thousands of people converge upon the city. The symbol of Sneek is its 15th century Waterpoort or water gate, built to prevent access to the city by water. 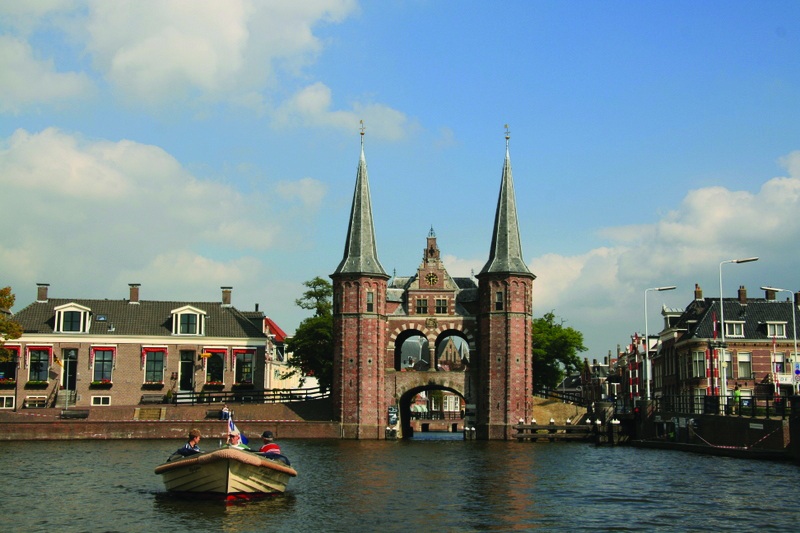 More things sea and trade related are explained in the Fries Scheepvaart Museum in the Kleinzand, a canal on which the wealthy traders of the 17th and 18th centuries built their homes. Sneek is another of the cities of Friesland where you can easily spend a weekend.

10 Sloten (Sleat)
Sloten thinks big when it comes to being small: with about 760 inhabitants it prides itself on being the smallest city of the country. Its ambition doesn’t stop there: it would also like to be recognised as the smallest city in the world. This means it takes about five minutes to ‘do’ Sloten which is not good for tourist revenue. 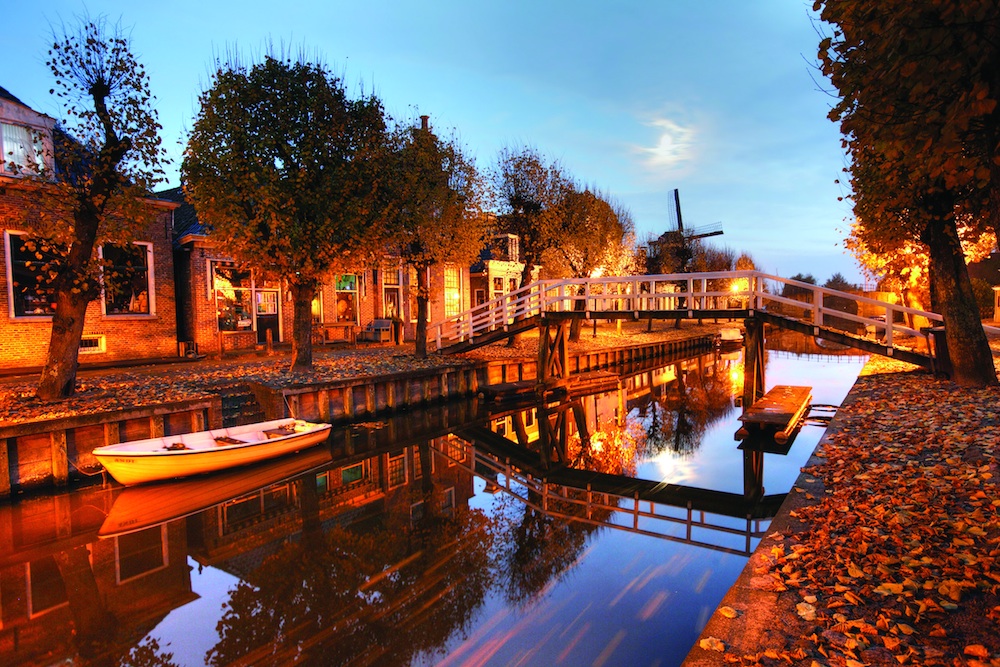 The last Saturday in June, however, makes up for this. Sloten’s annual ‘vrijmarkt’ or free market, the Simpelsneon, or Onion Saturday, attracts bargain hunters from far and wide. The market has nothing to do with onions but refers to the shape of the old town.

Stavoren, Friesland’s oldest town, is well-known for its watersports facilities, but those who are into less strenuous activities will be pleased to know that they can visit the town’s ‘orchid farm’. There is a Malaysian garden, a Taiwanese garden and a butterfly valley. The Friesians have a thing about size as we have seen in Sloten: both the tropical garden and the butterfly valley are the biggest in Europe. 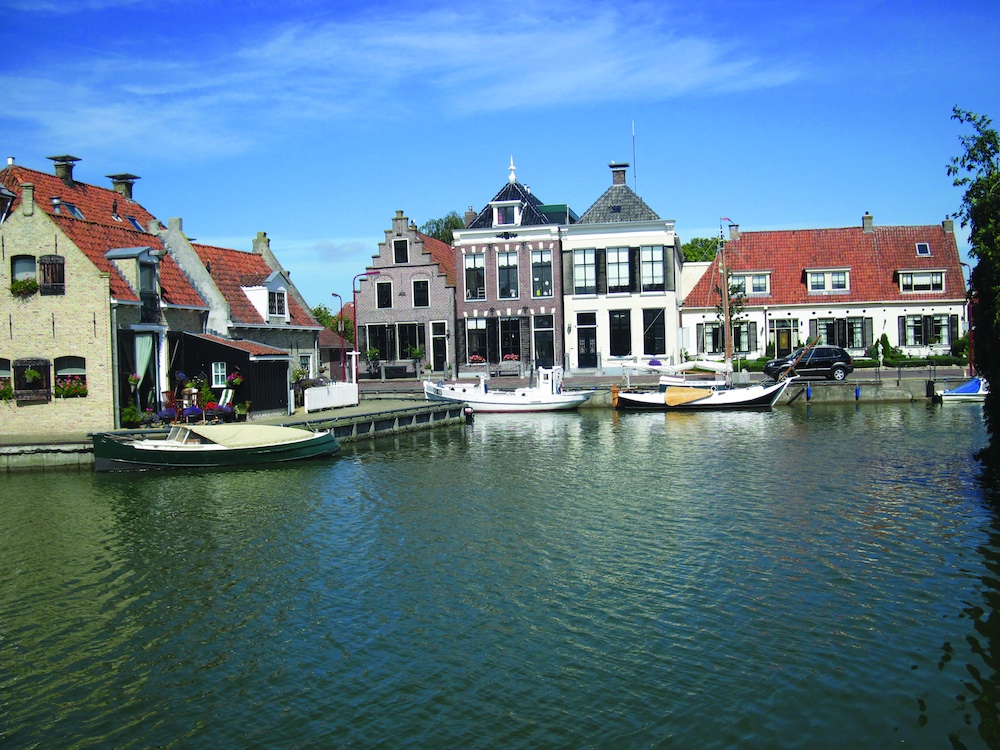 Stavoren is famous for the story of the ‘Vrouwtje van Stavoren’ (the little woman of Stavoren), a rich merchant’s widow who sent one of her ships to find the most valuable thing in the world. The ship came back loaded with grain.

The woman angrily ordered the grain to be dumped into the sea. Warned that such extravagance might end in poverty she threw a gold ring into the sea and said she would no more be poor than the ring would find its way back to her. Then one day the kitchen maid brought her the ring which had been found in the belly of a fish. The widow, needless to say, lost all her money and died in poverty. Stavoren has honoured the greedy thing with a statue.