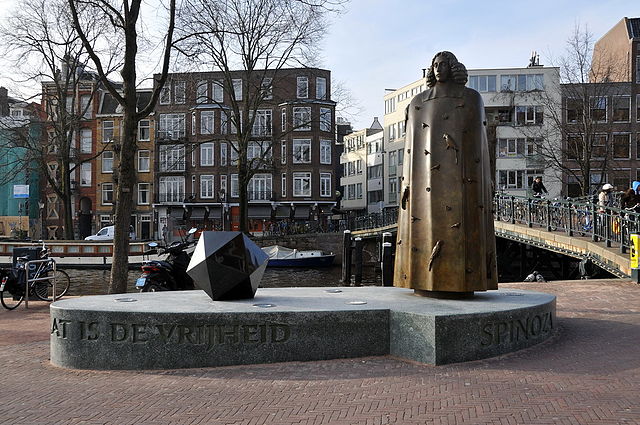 The monument to Spinoza in Amsterdam. Photo: FaceMePLS via Wikimedia Commons

Group thinking is dividing this country. Nationalist right-wing opinion is feeding on romantic nationalism and all the regressive left has to show for itself are equally divisive tales of identity politics. The group is elbowing out the concepts of nationhood as well as individuality. The progressive left, traditionally based on universal values and the elevation of the masses, has been left to languish on the side lines.

We, a number of progressive Dutch people from different backgrounds, refuse to give up on the left-wing ideas that have stimulated freedom and modern thought in the Netherlands and the entire Western world.

We are worried about increasing polarisation and segregation and are longing for a society in which independent citizens elevate themselves and society as a whole. That is why we advocate Vrij Links (The Free Left), a movement firmly rooted in the time-honoured principles of liberalism and secularism.

Left wing and progressive liberal movements owe their existence to their championship of individual self-determination. This long adventure dates from the Enlightenment and found its expression during the French Revolution.

As the Industrial Revolution progressed, the proletariat organised into unions whose power peaked between 1950s and 1980s. As far as we are concerned that adventure has not come to an end.

The great philosopher Spinoza sowed the seeds of a free Europe in the fertile Dutch soil and democracy and secular thought flourished. From the shadows of the present ethnic-religious conflicts, we want to launch an appeal to modern progressives and remind people of the origin of our freedom. In line with the radicals of the Enlightenment, we think that it is vital we defend the freedom of the individual.

What we want is a free and unhampered debate, a neutral state, secular education for all children and a renewed appreciation for individual freedom.

An open society thrives on freedom of expression. For centuries the Netherlands has been a country in which worldviews could be challenged and this has led to a unique and free society. What is interpreted as an insult by some, may be a fresh point of view or analysis for others.

Vrij Links distances itself from the suggestion that non-western Dutch people should be protected from a free debate because they are not ready for such expressions of modernity. We think this way of thinking – called the racism of lower expectations by the British – negates the individuality of Dutch people with a non-western background.

An open society is characterised by a peaceful battle of ideas, in which the best idea ultimately wins. To exclude, for instance, religious practices or ideas from the debate only helps the theocratic patriarchy and limits individual emancipation.

No idea, religious or profane, is above criticism in a free world. Ideas have no rights. Citizens have rights. In an open society the truth and moral value of ideas are continually evaluated by free citizens.

A neutral state and secular education

The concessions that were made in bygone centuries to religious groups were easily absorbed by Dutch society. Big demographic changes, especially in the big cities, have meant this is no longer the case. A conservative religious worldview is competing with progressive values, especially in the areas of freedom of conscience and the autonomy of the individual.

Vrij Links opposes a separate mention of freedom of religion in the constitution because it leads to the preferential treatment of those who consider themselves to belong to one of the major religions.

Pressure on secularism means pressure on personal freedoms and when this is the case homophobia, gender inequality and religious pressures flourish. This will inevitably lead to a loss of equal opportunities and talent. That is why we want a solidly secular education system.

Secularism is often equated, consciously or subconsciously, with atheism but all it means is a neutral societal playing field for all ideas and opinions. Vrij Links strives to abolish faith-based education during regular school hours. Doubt and investigation are the driving forces behind individual development. Students have to learn to think for themselves and come to their own conclusions about all religions and philosophies.

Vrij Links stands for equality for all regardless of gender, colour, sexual orientation and creed. This uncompromising principle of anti-discrimination is the jewel in the crown of a liberal movement which fits in with the Dutch tradition of pitting individuality against the collective and advocating individual emancipation

Part of the current ‘left-wing’ movement is trying to profit from the popularity of identity-based thinking. This trend, which came over from the United States, defines people according to religion, background, gender, sexual orientation and race. Vrij Links believes that the world is made up of seven billion people with seven billion identities and rejects group thinking both on the left and the right.

Every human being is free to follow his or her chosen path. Perhaps the ability to choose a partner of your liking and to be in charge of your body and sexuality constitute the most intimate and fundamental human rights of all.

Freedom as we know it was devised and fought for by the generations that preceded us. Freedom of expression or conscience are not a ‘Western’ concept or relative but valuable in themselves. These soft human values are vulnerable but at the same time they represent humankind’s  greatest achievement.

Great autonomous thinkers sowed the seeds for modernity and democracy. As progressive citizens we have no choice but to continue on the road which was ‘Enlightened’ by Spinoza and his fellow travellers.