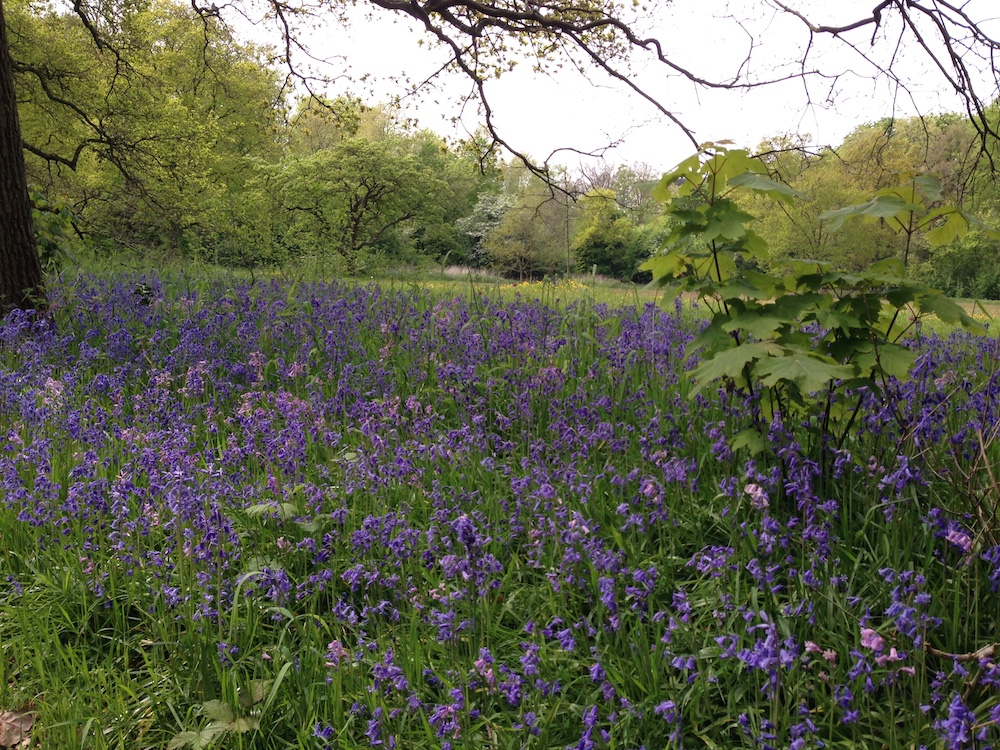 Tucked away behind an imposing wall on the route from The Hague to Scheveningen is a little-known park with an eventful history. Moira Holden has been to visit.

A sea-like carpet of bluebells stretches deep into the woodland in Sorghvliet Park as spring coaxes out the wildflowers. Secluded by a high wall as the traffic thunders up the road towards the seaside, this peaceful Dutch scene replaces the sound of the cars with a relaxing, calm mood.

Sorghvliet translates into ‘free of cares’ and it is easy to see why this leafy oasis has become a place for quiet solitude. It isn’t a busy park, but it’s definitely a special spot for those in the know.

At this time of the year, the floor of the parkland becomes a platform for the season’s wood anemones and lily of the valley, but it’s the breath-taking swathes of bluebells that dominate the lie of the parkland. Today, the towering trees and the wildflowers don’t give a hint of the major role played by the park in the history of the state of the Netherlands.

Jacob Cats, the Dutch politician and prominent poet who had a background in law, is the person responsible for the origins of Sorghvliet. He came to live in The Hague in the seventeenth century and recognised the potential of the bare dunes of the landscape because he had experience of reclaiming land.

At the age of 65, he set about making the area a home for himself and turned a small farmstead into a mansion – Catshuis. ‘By this time, his wife had died and his two daughters had left home and had their own families,’ says Mien Huisman-Berkhout, a guide for the IVN (Institute for Nature and Sustainability). ‘But his grandchildren would come here to play, fish and skate, and get lost in the maze.’

Cats, known affectionately by the Dutch as ‘Father Cats’, built a formal garden and enjoyed its tranquillity – frequently he would sit on a ridge surrounded by the bluebells to compose poetry and moral tales for the Emblem books.

‘He was considered a very wise man, and Dutch people would often put his books next to the Bible on their shelves,’ said Mien. ‘His wish was to give the land to the following generations, but after the death of his second daughter the estate was sold.’

Cats lived at the park until his death at the age of 82 in 1660. The Bentinck family took ownership – they delighted in their surroundings and were keen to show off the beauty of the garden, so it soon became well-known in the Netherlands.

The first member of the family, Hans Willem Bentinck, turned the park into a French landscape in 1675. But just one generation later, his son Willem, changed the landscape to an English design.

In the 19th century, Sorghvliet was bought by King Willem II after he had lost his lands following the separation from Belgium. He commissioned plans for an opulent palace, but he lacked the funds to make the plans into a reality, and following his death much of his land was sold to pay off the high levels of debt he had accumulated.

At one point, the orchards and kitchen gardens guaranteed that the estate was as self-sufficient as possible and owners would swap bulbs and seeds with other estates to bring in new flora alongside the beech, oak, lime, elm and horse chestnut trees. Later, as the city began to undergo more building development a wall was built in1920 to protect the park’s seclusion and to keep out the noise.

The occupation by the Germans during the Second World War brought a massive change to the peaceful surroundings. They used the site as a place to train spies and to release V2 rockets on London.

Eagle-eyed visitors can spot where the ground still slopes at certain points – this is where the mobile launchers were operated and left their mark. ‘A thundering noise could be heard as the rockets took off on their way to London,’ says Mien. ‘Sometimes the Germans got it wrong and the noise would stop – that’s when we knew the rockets were going to land on The Hague instead.’

The old, imposing trees in Sorghvliet are a legacy of the occupation. Elsewhere around the city, the trees were cut down because the people of the The Hague needed wood for their heating during the war years.

Straight after the war, the Americans took over the park, but did little with it. The estate has never been owned by the council of The Hague and is now in the hands of the Dutch state.

Inside the park, the Catshuis is visible through a security fence. It may look rather nondescript in the sense that it isn’t a large, impressive building, but it has been one of the official residences for Dutch prime ministers since 1963.

Some prime ministers have lived here or used it as a pied-a-terre, but it has principally become a high-powered location to receive high-profile visitors. Barack Obama attended a G7 summit leaders’ conference in the Catshuis in March 2014, alongside Angela Merkel, François Hollande and David Cameron. In 1990, Nelson Mandela was a guest here when he visited the Netherlands for the first time.

Despite the closeted VIP presence and the ghosts of its history, the park’s main function has come full circle and is enjoyed again solely for its beauty. Jacob Cats would definitely approve.

An annual pass costs €7.15 and is available from The Hague tourist office.