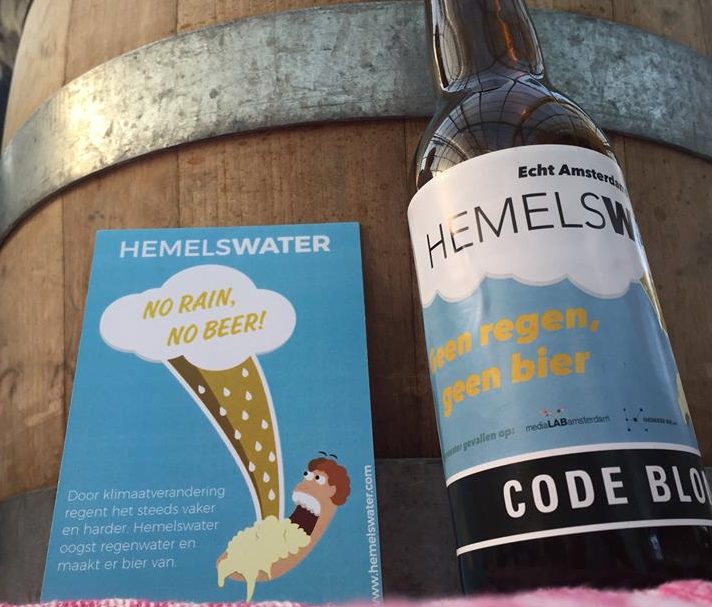 It rains a lot in the Netherlands, as anyone living here cannot have failed to notice. So why not do something useful with it? Molly Quell looks at a new beer brewed using rainwater.

A flood in Copenhagen in 2011 resulted in much damage to the city. But it also began the development of Amsterdam’s first beer made from rainwater. The widespread water problems in the Danish capital set off alarm bells among Amsterdam officials. The city’s waterboard Waternet came up with an initiative – named Rainproof – to focus on boosting the city’s capacity to absorb the surplus water, while putting the rain to good use .

The success of one such project was celebrated last week at the Volkshotel in the Weesperzijde neighbourhood of Amsterdam where a crowd gathered to toast a new beer.

The beer, called Code Blond as a nod to the Dutch weather service’s weather warnings, was the brainchild of Joris Hoebe, who owns the creative agency Spektor. Hoebe also serves as a coach at Amsterdam’s hbo college which is where he met Pavel van Deutekom, a project manager at the college’s start-up incubator MediaLAB.

Hoebe had been given home-brewing kit by his mother the previous Christmas and had been dabbling in beer brewing. He realised the process used a lot of water and approached Van Deutekom with the idea to make the process more sustainable using rainwater.

‘He [Hoebe] asked me if we could try to make beer with rainwater so I said sure,’ says Pavel. He rigged up a system to collect 40 litres and they were off.

Ultimately, it was brewed at De Prael. The Amsterdam-based brewery specifically hires people with physical and mental disabilities. When brewer Thomas Gesink was approached by the Hemelswater group, he was keen on the idea. ‘We see the issue with rainwater as a social issue as well, so it fit into our mission statement,’ Gesink says.

The first batch of rainwater was collected from the Volkshotel in Amsterdam, where the launch event took place. The beer itself is the same recipe as De Prael’s Bitterblond, but uses the collected rainwater rather than tap water.

The taste is similar but softer, Gesink says: ‘We were concerned about the acid level, but ultimately, it was only slightly higher than the water we were using.’

The rainwater is run through a special filtration system, also developed by the group, to ensure it is safe for drinking. The initially batch of the beer was 1,000 litres but it proved to be so popular, the brewery has continued to make it and it’s now available at a number of cafes in the city as well as in bottles.

De Prael is looking to expand its brewery by opening a section location which Gesink wants to have operate completely with rainwater. And another MediaLAB project has found a different alcoholic use. They’ve created a bottled gin and tonic made with gin distilled from rainwater. Heaven’s water indeed.