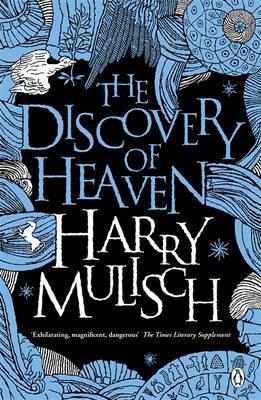 When I told Dutch friends of mine that I was going to tackle the Dutch classic The Discovery of Heaven (De ontdekking van de hemel) by Harry Mulisch they were not supportive. ‘It was the worst book I read in high school,’ one told me. ‘You should make an appointment with your therapist, you’ll need it,’ said another.

Published in 1992, IT was voted the Best Dutch Language Book Ever in 2007 by readers of the NRC newspaper. When Mulisch died in 2010, prime minister Mark Rutte described his death as ‘a loss for Dutch literature and the Netherlands.’ The film adaptation starred no-one less than Stephen Fry and was directed by Jeroen Krabbé, so the odds for a good read were high.

The Discovery of Heaven opens with two angels having a conversation about getting the 10 Commandments back. It turns out, for reasons not explained, the angel ordered to fetch them can’t go to earth so must resort to a Rube Goldberg-esque series of events to ensure the tablets are returned, including both World Wars.

In essence, the story follows the lives of two men, Onno and Max, whose friendship ultimately leads to a son, Quinten, who, at the end of the book, ascends to heaven to take back the tablets – having taken 905 pages to do so.

The main female character, Quinten’s mother Ada, spends 75% of the novel in a coma, which seems to be par for the course in terms of how classic Dutch literature treats women. It’s unclear who the father of our Jesus-like hero is, as Ada has slept with both Onno and Max on the same day at, where else, a conference of revolutionaries in Cuba.

The book is also set in 1968, so when Ada is critically injured in a car accident that leaves Onno and Max unscathed, it is decided that Onno couldn’t possibly raise the baby alone. Rather, Max couples up with Ada’s mother, Sophie, who Ada hated, to raise Quinten.

It is, in all, a complicated, and messy family history, but strangely gripping.  And if you skip over the angel bits, the book feels authentic in a way that other classics such as Turkish Delight or The Evenings or even The Dinner does not – in this foreigner’s limited experience at least.

The discussion Onno has with his family over who will raise Quinten is frank and direct in the typically Dutch way which everyone who has sat in on a difficult Dutch family discussion will relate to. The apartments they live in are small and cramped and short distances are depicted as insurmountable.

Mulisch is impressively good at creating dynamic characters with complications and quirks who genuinely interact with one another. His dialogue, in particular, feels so realistic you think you might just be sitting in a cafe, next to those two men, as they argue over philosophy and politics.

At the same time, bring in the angels and The Discovery of Heaven reminds me somewhat of Ayn Rand’s Atlas Shrugged, which clocks in at 1,163 pages, and spends so much of the book trying to shove philosophy down your throat that the story is utterly lost.

And yet, when it comes to The Discovery of Heaven, I did mostly enjoy it.

A major caveat to the English version is the questionable translation at times. Paul Vincent translated the work into English in 1996 and manages to bungle a critically important line in the book, when Max tells Ana to ‘bring yourself off’ (Dutch: maak je jezelf klaar) after leaving her unsatisfied during a sexual encounter.

The moment is pivotal. Ana leaves Max after this incident, which results in her ultimately marrying Onno and becoming pregnant. A much better translation would be ‘get yourself off’ and this isn’t the only instance in the book where, after referring to the Dutch version, I felt better words could have been chosen.

Despite these few niggles, The Discovery of Heaven is much more enjoyable than many of the other Dutch classics I have tackled and, most importantly, it feels quintessentially Dutch. Just skim the parts where the angels are talking.

You can buy The Discovery of Heaven at the American Book Center.