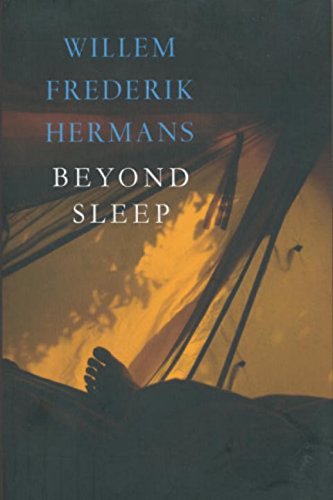 Beyond Sleep (Nooit meer slapen) is a holy grail quest written in 1966 by classic Dutch author Willem Frederik Hermans. The book, which follows geology student Alfred Issendorf from Amsterdam to the Norwegian wilderness in search of proof of meteor impacts, is widely considered part of the Dutch literary canon

Alfred travels to Norway to track down aerial photographs that would show telltale meteor craters, a theory put forth by his advisor, before joining a fieldwork expedition in the region. But Alfred is passed off from one research institute to another, never obtaining the photographs and joining the expedition, with his friend Arne, tired and annoyed.

The trip goes poorly. Alfred is unprepared for the rough terrain and does not get along with the other students on the trip. Alfred’s resentment comes to a head in a disagreement over a compass reading and he heads off, leaving Arne behind. Alfred soon realises he was the one who was incorrect, loses his compass, and then discovers an even greater tragedy.

Hermans’ style of writing is short and catchy and the book is with memorable one-liners. ‘The meat is called Lordagsrull. Viking brand. How apt,’ Hermans writes of the group’s first meal on their trek in the Norwegian woods. The opening sentence – ‘The porter is disabled,’ – is widely considered one of the best in Dutch literature, which says a lot in itself.

Hermans’ also does such an excellent job of crafting Alfred’s irritating personality that, when, near the end of the book, he’s climbing down a dangerous ledge, you very nearly want him to fall. You know he doesn’t, as the book has another 80 pages to go, but you hope for it nonetheless.

The author was born in 1921 and published his more famous work The Darkroom of Damocles (De donkere kamer van Damokles) in 1958. Together with Gerard Reve (The Evenings) and Harry Mulisch (The Discovery of Heaven), he is considered one of the three most important post-war Dutch authors.

Beyond his books, he’s written dozens of short stories, plays, essays and poems during his nearly fifty-year career. Hermans died in 1995 and it would be another ten years before the book was translated into English. In 2016, it was also made into a movie.

Readers may also appreciate another motif in the book: communication. Some of Alfred’s struggles stem from his lack of understanding of the Norwegian language as well as his own ability to articulate his needs and feelings.

If you’re interested in Dutch literature, or at least one-upping Dutch people at a dinner party with your knowledge of the subject, it’s worth a read.