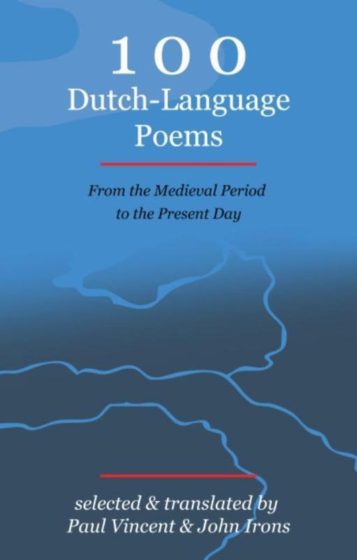 Vincent and Irons, both former professors turned translators, won the Oxford-Weidenfeld Translation Prize in 2016 for their book.  They note in the introduction that ‘the idea of representatives in a work of this modest scope remains a mirage’, but the pair did strive to include as many important works of poetry as possible while limiting themselves to one poem per poet and attempting to balance the gender, location and time period of the writer.

The collection opens with the oldest known poem written in the Dutch language, an anonymous work probably written by a Dutch-speaking scribe in England to test his pen. ‘Hebban olla vogala nestas hagunnan’ was written sometime in the 11th century and is sometimes called the Rochester Poem since it was discovered in 1932 on the blank page at the beginning of a manuscript that was likely made in the abbey of Rochester in England.

The book prints the original Dutch (or in a few cases, Frisian) on the left page with the translation into English on the right page. The earliest works are barely comprehensible as Dutch, but as time passes, the language becomes increasingly recognisable, a process that is fun to observe.

While some of the poems address Dutch culture, events or the landscape directly, many focus on universal themes of love and loss. Joost van den Vondel’s poem titled, in English, My Young Daughter’s Funeral, from 1633, transcends nationalism and heartbreakingly describes the untimely death of his young child.

‘Ferocious Death that hates what’s pure and air
Spares old folk with grey hair.
It sits on high and aims its shaft of spite
At the poor guiltless mite,
And laughs when, at her dying,
Sad mothers are all crying.’

Other poems tackle topics familiar to any international living in the Netherlands: the weather and the landscape. There seems to be a dictionary between the works in the collection, the conditions are either loved or loathed. In the 1936 poem ‘In Memory Of Holland’, named the best poem of the century in 2000, poet Hendrik Marsman describes the Dutch landscape and the country’s struggle against the water.

The country fares less well in other works. In his 1851 poem Boutade, P.A. de Génestet describes the country as ‘A sodden fetid plot of vapes dank and damp,’ closing the work with the line: ‘You – not at my request – once wrested from the sea.’

The book is a great overview of Dutch-language poetry and the explanations of how the work was put together and the historical overview are very helpful in contextualising the collection. It would make a great gift for anyone interested in the Netherlands or poetry or both.

You can get a copy of 100 Dutch-language Poems: From the Medieval Period to the Present Day from the American Book Center.