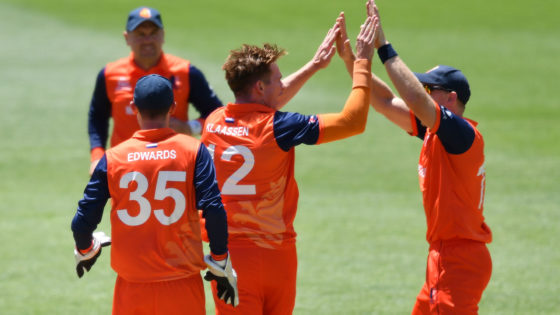 The Netherlands pulled off a historic 13-run victory in their final T20 World Cup game to knock out the Group 2 favourites South Africa in Adelaide on Sunday.

Contributions from the top order with the bat, spearheaded by Colin Ackermann’s unbeaten 41 off 26 balls, propelled the Dutch to a competitive 158-4 before an inspired spell of bowling by Brandon Glover (3-9) aided by sound fielding gave the Netherlands their first win against their African counterparts in any format.

If Pakistan beat Bangladesh and Zimbabwe lose to India later in the day, it will ensure the Dutch automatic qualification for the 2024 T20 World Cup in the West Indies and USA by virtue of finishing in the top four of Group 2.

Having lost the toss and being inserted to bat first, the Dutch openers Max O’Dowd and Stephan Myburgh started off strong to put on a 58-run partnership. Myburgh (37), in his final outing for the Netherlands, struck seven boundaries in typical aggressive fashion off Kagiso Rabada and Wayne Parnell.

Tom Cooper carried the momentum with a 19-ball 35, hitting a brace of fours and as many sixes, with a reverse sweep off left-arm spinner, Keshav Maharaj (2-27), in the 13th over the highlight of his knock. Maharaj struck back to remove O’Dowd, the tournament’s leading run-scorer, and Cooper, both caught off his successive overs, to halt their charge.

Ackermann and Scott Edwards remained unfazed as they took on the erring South African quicks, who bowled too full at the death, to scoop up 31 runs off the final two overs. Ackermann clipped two identical sixes off the pads off Parnell in the final over after Edwards struck two boundaries off Rabada in the 19th.

Despite their late assault, Myburgh conceded they ‘would have liked to get to 160-170 after a strong start’.

It proved enough as South Africa faltered in their chase as they had a contrasting powerplay, losing both openers, Quinton de Kock (13) and Temba Bavuma (20), early to be pegged back at 39-2.

Despite starts from the middle-order, a big partnership was found wanting as the Dutch quicks chipped away with timely wickets. Brandon Glover had Rilee Rossouw (25) caught targeting the longer square boundary before a leading edge off Aiden Markram (17) was pouched by a tumbling Myburgh at short cover off Fred Klaassen in the 13th over.

Glover’s second over, the 16th of the innings, proved to be decisive as David Miller was snuffed out via an incredible running catch by Roelof van der Merwe, the all-rounder who represented South Africa at the 2009 and 2010 T20 World Cups. Two balls later, Parnell feathered one through to Edwards as the South Africans slid from 90-3 to 120-7.

Bas de Leede accounted for Heinrich Klaassen (21) and a hamstrung Keshav Maharaj (13) to seal a 13-run win and add to the Netherlands’ rich history of beating top-tier full-members at the T20 World Cup, having previously bested England at the 2009 and 2014 edition.

‘We were on a high after the win against Zimbabwe and we said it’s our last game in the World Cup this year and let’s make it a big one. To see it come off is very special,’ Glover told a press conference.

‘In these two games, I feel the team has come together. We have worked extremely hard and with the team gelling, we feel we have been playing our best form of cricket to show that we can compete with the best in the world. We just needed that complete performance and we feel like we have done just that.’