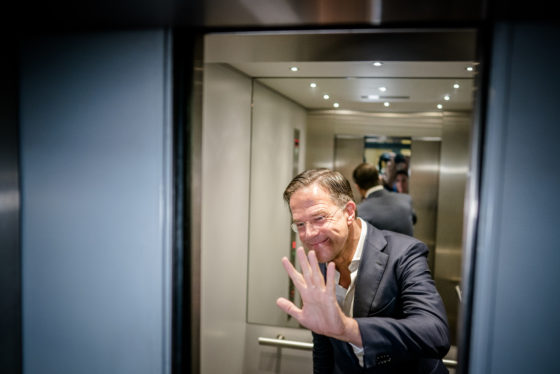 In need of a lift: Mark Rutte is trying to sort out a rift between his party’s MPs and asylum minister. Photo: ANP/Bart Maat

Prime minister Mark Rutte will try to break the deadlock in his own VVD party over how to accommodate the overflow of asylum seekers at the reception centre in Ter Apel.

Rutte accepted an invitation to join the weekly meeting of the VVD’s parliamentary group, an unusual step that reflects the strong divisions within the right-wing liberal party on the issue.

The VVD minister responsible for asylum, Eric van der Burg, has been unable to secure the backing of his colleagues for a law that would give him more powers to order local councils to take in asylum seekers and refugees.

MPs in the party have told NRC they object to local authorities being overruled by central government, even though they support the idea of distributing asylum seekers more evenly around the country.

But they also want to see tighter limits on the number of asylum seekers arriving in the country before they will back the bill. They say the law should be temporary and include a cap on the number of refugees each municipality is obliged to take in.

The reception centre at Ter Apel, in Groningen, has suffered from chronic overcrowding all year, with new arrivals having to sleep on the grass verge outside the building with no access to sanitation or medicines.

The conditions were condemned as ‘inhumane’ by the emergency medical charity Artsen zonder Grenzen (Médicins sans Frontières), after it was called in to help at Ter Apel for the first time in its history at the end of August. MSF started work days after a three-month-old baby died in a sports hall being used as an overspill facility.

Van der Burg has also been ordered by the district court in The Hague to improve living conditions for asylum seekers across the country, in a case brought by refugee charity Vluchtelingenwerk.

But the minister’s attempts to negotiate with local authorities to provide more space have run into a brick wall. Just one out of the 344 municipal councils has agreed to arrange extra places for unaccompanied child refugees currently in Ter Apel, where 300 children are living alone even though the centre only has capacity for 55.

Van der Burg had hoped to present a new law to parliament this week giving him more direct control of accommodation of new asylum seekers and people who have been granted refugee status (‘statushouders’) from January 1.

Asylum spokesman Ruben Brekelmans said during a debate in parliament on Monday that ‘the problem of large numbers of arrivals remains’. The justice ministry expects between 50,000 and 77,000 people to claim asylum in the Netherlands next year.

Even if Rutte is able to broker a deal that allows his party’s MPs to support his ministerial colleague, the issue is likely to cause further tension within the coalition.

While the Christian Democrats (CDA) support a stronger line on asylum, the other two government parties, D66 and the ChristenUnie (CU) have already made concessions to the VVD when they agreed in the summer to put further restrictions on family reunions.

Members of the CU have submitted a motion at the party’s autumn conference later this month calling for it to withdraw its confidence in the VVD over the asylum issue.

Party leader Gert-Jan Segers reluctantly agreed to the autumn deal, calling it ‘just bearable’, but rank and file members say the VVD has failed to keep its side of the bargain by blocking Van der Burg’s bill.

The issue is also expected to dominate the VVD’s conference on November 19, where local activists have tabled a motion calling the propsed law a ‘magnet for asylum seekers’.